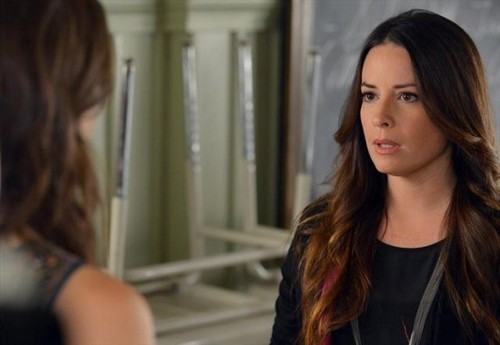 Tonight on the ABC Family a new episode of PRETTY LITTLE LIARS airs called “Out of the Frying Pan, into the Inferno.” On tonight’s show Aria knows that she should tell Ezra about his son, but she isn’t ready to face the idea of what it might do to her relationship. Did you watch last week’s show? We did and we recapped it here for you!

On last week’s show Aria was down for the count when sidelined by the flu, so Hanna and Emily were on their own to follow up on a new clue. Surprisingly, Meredith stepped up to help take care of Aria while her father was away, but when it started to look like Meredith may have ulterior motives to her nursing Aria back to health, Hanna and Emily turned their attention towards saving their friend.  Meanwhile, Spencer took a break from all the sleuthing to surprise Toby for their anniversary.

On tonight’s show Secrets drive the Liars into taking desperate actions, in “Out of the Frying Pan, into the Inferno.”  Everyone has secrets – Aria, Emily, Hanna and Spencer have more than most, but with all of the secrets they are holding it may be starting to get overwhelming for them. Aria knows that she should tell Ezra about his son, but she isn’t ready to face the idea of what it might do to her relationship. Hanna, on the other hand, is sure Caleb is keeping a secret from her and she is determined to find out what it is. Spencer is fed up with all of the secrets and decides she no longer wants to play the games. Will their secrets drive the girls to take desperate actions that could, in turn, make the situation worse?  Meanwhile, Emily learns more about what Ali may have been hiding the summer before her murder.

Tonight’s episode begins with Emily receiving a box from Nate that seems to hold clues about Ali and the time right before her death. Hannah is also grilled by her mother. She was injured in last week’s fight inside a store with some mystery character. She can’t say that though and blames it on gym class. Her mom asks if Mona is bothering her and Hannah storms out after making it clear that she doesn’t want to have the conversation.

Emily takes the notebook and gives it to Spencer to try and decipher.  Emily thinks it’s a conversation between Ali and the person who killed her but Spencer doesn’t get why anyone cares anymore. Ali tried to hook up with everyone including Toby. Spencer breaks down and tells her that she and Toby split.

Spencer gets a text from Aria saying Erza freaked out so Spencer goes running to find her. Instead she sees Ezra and freaks out telling him not to take the fact that Maggie hid his son for 7 years out on Aria. He has no clue what she’s talking about and Spencer makes a quick escape.  Ezra hunts Aria down demanding answers. Aria then turns up at Spencers and is waiting for her.  Spencer thinks they need to stop blaming A for every bad thing that happens and shrugs off the fact that Aria knows she was set up.

Aria goes home upset and her dad offers to make her grilled cheese. Emily interrupts their meal to talk about the notebook. After piecing things together she thinks that A was pregnant when she was killed.  Emily gives it to her mother who now works at the police station and she suggests that maybe someone there can figure out who killed her.

While Emily is at the station Hanna walks in after being busted for underage drinking. She says she wasn’t actually drinking, but instead was holding it for someone else. As they are talking they realize from photographs that the cop who took the notebook eagerly from Emily might actually have had a tie to A. They think some guy in Cape Cod got A pregnant and according to photos this cop was in Cape Cod.

Spencer is sick of second guessing Toby so she decides to take a drastic step. She hires a private eye to follow him. Meanwhile Hanna has another blow out with her mom. Aria catches up with Ezra and he tells her he’s not mad at her. Maggie told him that she swore Aria to secrecy. Ezra tells aria he is leaving and going to meet his son. She asks if she can call him and instead of saying yes he says they’ll talk soon. Tune in next week to see what happens next!