Secrets Of The Bachelor Revealed! (Photo) 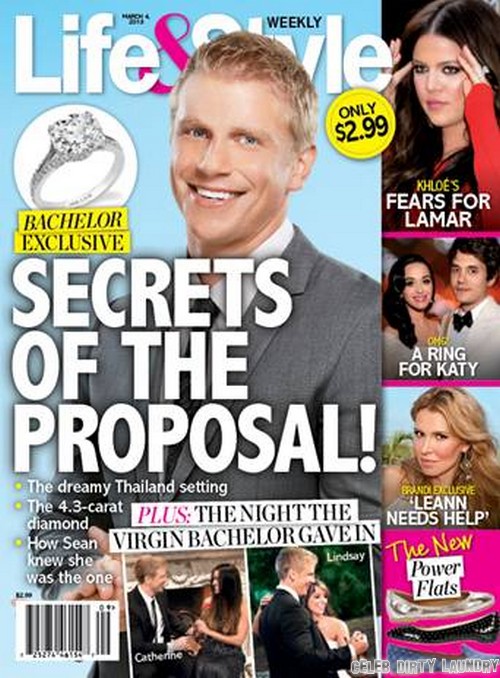 In case you’ve been watching Sean Lowe’s season of The Bachelor, then you know that it’s getting good! With three girls remaining in the competition to win Sean’s heart, it’s still a mystery as to whom he’ll ask to marry. Have you been tuning in for the show? If not, you can get up to date with the Sean Tells All special HERE or this week’s recap of the show HERE.

Sean appears on the cover of the latest issue of Life & Style magazine and apparently the tabloid is blowing the lid off of everything that’s going down in Thailand for the show’s season finale. We’re excited! Are you?

The magazine reports that the proposal takes place in Thailand and Sean presents his future wife with a $76,000 4.3-carat Neil Lane engagement ring in a platinum setting. Of course we’re all going to have to wait until March 11, 2013 for the engagement goodness to go down, but on November 17th, Sean got down on one knee and proposed to his winning lady.

The lucky couple stayed in a $1,100-a-night room at the Anantara Golden Triangle Resort & Spa in Chiang Rai, set in the lush jungle of northern Thailand with stunning views of the Mekong River, Myanmar and Laos.

And — phew! — three months later, Sean and his fiancée are still together. “They’re 100 percent engaged and committed,” reveals an insider.

In fact, as Life & Style previously reported, the couple are busy planning a wedding and hope to walk down the aisle soon. “Her ideal wedding location would be California,” says an excited relative of the winner, who says Sean “fits perfectly into our family.”

We’re excited to see it all play out! Are you? Who do you think Sean will end up proposing to on the season finale of the show? Hit the comments and let us know your thoughts!