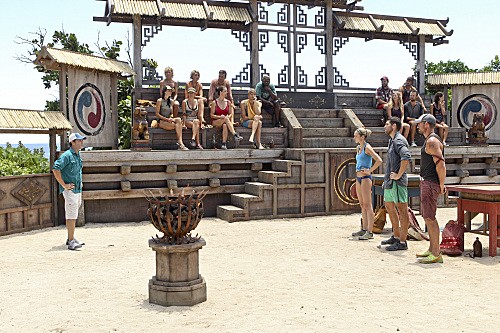 Tonight on CBS their Emmy Award-winning series SURVIVOR continues with another new episode called, “The Dead Can Still Talk.” On tonight’s show this season of blindsides continues at a wild, unpredictable tribal council. Did you watch last week’s episode? We did and if you want to catch up we have a full and detailed recap, right here.

On last week’s show for the first time ever, a Redemption Island battle pitted husband against wife. In another series first, a castaway refused to accept an immunity clue and a shocking blindside at tribal sent another castaway home.  At redemption island Marissa was out of it and headed home after nine days.  At tribal council Brad was blindsided and sent to redemption island.  Jeff told them that it was one of the most shocking votes and biggest shifts of power he’s ever seen in the game.

On tonight’s show  one castaway sacrifices their own life in the game for a loved one. Meanwhile, this season of blindsides continues at a wild, unpredictable tribal council.

The girls hope to flip Caleb over to them after the blindside of Brad. Colton’s honey was the mastermind of the former NFL player’s downfall. The other guys – Hayden and Vydas – worry if they are now on the outs if Caleb makes a power play with the ladies…

On Redemption Island, Brad credits Colton for teaching Caleb some tactics that led him to his very strategic outing of Brad. He wakes Candice and John and tells them he’s there with them. Candice says his voice was the sweetest she’s heard – she’s thrilled he got ousted. John says he figured Brad would end up there for his bold moves, but is surprised that it happened so soon.

Brad tells them that he’s happy he won’t take any abuse at the Redemption challenge for a change (maybe). Candice is still steamed that his wife took her out on day one so she has zero sympathy for him.

At Galang, Laura M is giving Aras a nice backrub. She says it’s part of her strategy to build relationships. Arss says that her cuddling won’t get her into his alliance. He says she’s smart and knows she’s on the outs and is trying to get in good with those who may be able to save her.

Rupert’s wife Laura B laments that she doesn’t have the emotional connection that the Survivor veterans share and worries it could bite her later because she’s the outsider.

At the Redemption Challenge, both tribes pour in and Galang is shocked to see Brad was voted out – his wife in particular! Candice, John and Brad enter. Monica tells Brad she’s sorry and asks if she can take his spot. He tells her that she can’t and that he will battle back. He tells her adores her. He tells the crowd he’s not there because he’s a jerk. (says him…)

Jeff asks why Candice has so much to say about Brad when she hasn’t spent any time at either camp. Candice says it’s based on what she’s heard from those that have been voted out. Brad says the others know better and Monica chimes in tearily saying Candice hurt her feelings screaming curse words at Brad and Candice snaps back that she hurt her feelings when she voted her out.

The three take planks apart from a wooden crate to build a walkway. Candice is off to a strong start and the men are a good deal behind her. John is in 2nd and Brad in last. Brad gains ground and then Candice slows bringing them all closer together. Candice falls to 3rd and John moves into first. Players then have to take the wood pieces back off and use them to build a puzzle.

Brad is in 2nd and Candice in 3rd. John has all of his puzzle pieces ready and then Brad does as well. Candice is now ready as well. They start figuring out their puzzles! John is doing well and takes first place! John advises his wife and the other two are neck and neck. Brad completes his and Candice is out of the game for good!

John’s victory is bittersweet. Candice says it’s the hardest thing to leave him there. John is teared up. Jeff asks how he feels. John says he’s miserable – he said it was hard to see her voted out first and then to watch her go home is awful. Jeff lets them have a good-bye and then she burns her buff and goes.

John gets to decide who gets an immunity idol clue. He gives it to Monica again. Jeff asks if she is going to keep the clue or burn it. Hubby says to burn it so she does. Jeff congratulates the Redemption guys and sends them back to await the next duel. He sends the two tribes back to camp.

At Galang the other players tell Monica they’ll be surprised if Brad doesn’t survive the island. She says he’ll be fine and will get back in the game just fine. Monica says it doesn’t matter but any Culpepper being there is good with her. Tina thinks Monica will have to step up her game play now that Brad’s on Redemption. Monica works hard to cement their alliance (with words).

Tadhana tribe is sharing bananas and Ciera discusses their injuries and bug bites that are making life hard. She says she doesn’t know if it can get any worse since they are losing and physically falling apart. Katie shows the sores on her feet from continually wearing wet shoes and shows Caleb her toenail that’s dangling off.

Vytas feels bad for her but says it’s gross and he doesn’t want to see it. He wonders how to come out unscathed at the merge if they keep losing. Vytas says that no one can trust Caleb after what he did to Brad yet he’s hanging out with him. Vytas says he can’t get a read on Caleb since he’s a quite woodsman from Alabama. He complains of rashes and skin issues. Caleb says he feels powerful because he knows he can swing with the guys or girls as the swing vote.

At Tadhana, Vytas says unloading Brad has made the tribe more peaceful and quiet. He does yoga and enjoys the view. The tribe says they have to change the dynamic now that Brad has gone and they have to knuckle down and win. Ciera worries that if they don’t win, she’s back on the chopping block.

At the challenge, Jeff explains that they will race down a water slide one at a time, grab a ring and toss it at a peg. First team to five wins. The prize is steak, spices and a wok. The alternate prize is fishing gear. Galang has to sit out three and Monica, Laura B and Laura M take a seat.

Gervase and Caleb are head to head first. Caleb scores, Gervase misses. Tyson and Hayden are next. Tyson scores and the tribes are tied. Kat vs Katie is next. Katie scores and it’s 2-1 for the newbies. Vytas and Aras are in a brother vs brother showdown next. Vytas scores in one toss and it’s 3-1. Tina and Ciera face off next. Tina scores and it’s 3-2 newbies still slightly ahead. Caleb and Tyson are ready. Caleb scores and it’s 4-2 – one more point and Tadhana could have their first win.

It’s Hayden vs Gervase. Hayden scores and Tadhana has their first challenge victory. They get immunity and reward and finally they don’t have to go to tribal council! Jeff offers them the choice and they take the steaks instead of the fishing gear. That’s a teach a man to fish error, but maybe the protein will pay off for them.

Laura B is worried about tribal council because she’s the only non-veteran there and she was already voted out once and it was only Rupert’s swap sacrifice that saved her. Laura B tells Kat that the girls were bitching about her during the challenge because they wanted to be in her place. Tina says no one likes sitting out but Kat knows that Laura B is posturing because she’s the low man on the totem pole and is scrambling.

Aras, Gervase, Tina, Monica and Tyson are in an alliance of five. Tyson says Kat thinks she’s in it too. Tyson says they plan to vote out the person that most annoys them and that’s Laura B. Aras tells Laura M to vote out the other Laura and she readily agrees. Aras then thinks to himself that just because it’s an easy vote doesn’t mean it’s a smart vote. Aras and Tyson talk about putting the other Laura on the chopping block to knock out Brad which would leave Monica powerless.

They tell Monica they should vote Laura M and she realizes instantly that Laura B would be less of a threat on Redemption for her hubby than the other Laura. Aras pushes for Laura M but also realizes the more he tries to manipulate the vote, the more danger he puts himself in.

At Tribal, Galang gets their torches for the first time. Jeff asks Gervase how the game has changed since he played so long ago. He agrees it’s surreal and that the game play has drastically changed and that wheeling and dealing starts from day one. Tina says that she had played more by day 5 this season than she had the whole season back in season two. Monica says the stakes are higher for her at the duel because she’s now looking out for Brad. She says there’s also a concern at the merge if loved ones are still there because they become an instant alliance.

Aras says that he has to work on his current relationships with his tribe and that Vytas will have to fend for himself. Laura M agrees that Ciera has to make her own way as well. Jeff asks Gervase if Laura M being willing to squash her daughter at a challenge proves her loyalty. Gervase says not really because he knows how close they really are. Jeff asks Laura B if she really belongs there in Galang. She says she belongs and is a big part of the tribe.

Monica agrees that she is a part because she’s been with them since day one. Jeff says people always say nice things before they vote someone else. Jeff asks if she understands that the vets would prefer to be playing with her husband. She says she’s part of the tribe. Laura M counters and says that the other Laura doesn’t know the sting of putting out a torch at tribal and that sets her apart from the vets.

Laura M says she was shocked by the blindside as she arrives at Redemption. She says she trusted some people that she shouldn’t and she has to keep her wits about her to win the duel!