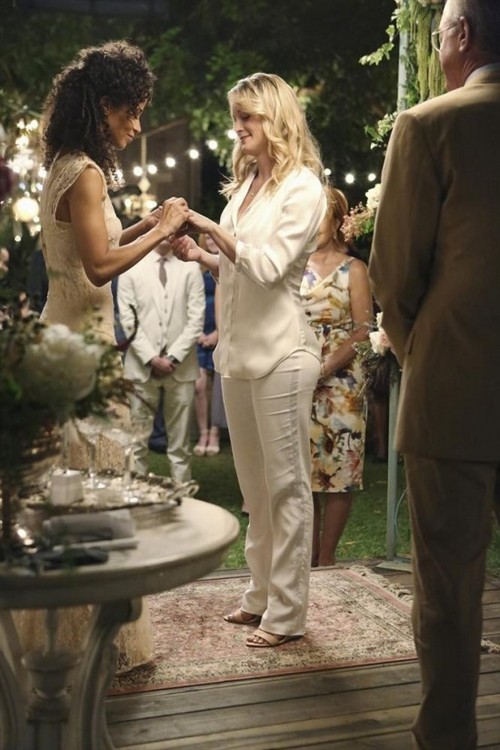 ABC Families new drama, THE FOSTERS returns tonight with its summer season finale called, “I Do.” On tonight’s show Stef and Lena’s parents arrive amidst a frenzy of wedding-planning.  Did you watch last week’s episode? We did and we recapped it here for you.

On last week’s show while Lena tried to process the extent of Mariana and Jesus’ lies, Stef and Mike headed to Ana’s to try and find Jesus. What they encountered landed someone in the hospital and changed the Foster family forever. While the family waited anxiously for news, tensions arose over the secrets the kids kept from Stef and Lena and even Brandon realized he was to blame for covering for the twins. Callie had a heart-to-heart with Brandon to help him understand the perspective of a foster child and Brandon learned how Callie’s mother died.

On tonight’s show Stef and Lena try to maintain calm when their parents descend on the Foster house for a very special celebration. Lena’s dad, Stewart (played by Stephen Collins), has agreed to officiate the ceremony while her mother Dana (Lorraine Toussaint) and Stef’s colorful, talkative mom Sharon (Annie Potts), attempt to keep things civil while disagreeing on floral arrangements. Sharon tries to strong-arm Frank (Sam McMurray) into attending. Stef avoids telling Lena she plans to return to work as soon as she is cleared. Meanwhile, when Callie’s case against Liam (Brandon Jones) boils down to her word against his, she must decide whether or not to lie in order to get some justice out of the situation. Callie and Jude get some news they’ve been hoping for, but Callie makes an emotional slip that could destroy any chance they finally have at happiness. Jim Hayman directed the episode written by series Executive Producers Bradley Bredeweg and Peter Paige.

Tonight’s season 1 episode 9 is going to be an exciting one that you won’t want to miss, so be sure to tune in for our live coverage of ABC Family’s The Fosters tonight at 9 PM EST!