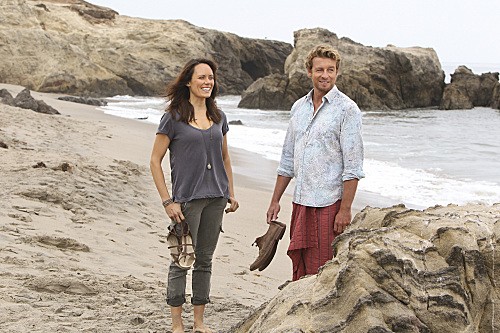 Tonight on CBS THE MENTALIST finally returned with a new episode called “My Blue Heaven.”  On tonight’s show we pick up two years after the Red John Case has been solved.  Did you watch last season six’s episode 8? If you want to get caught up before tonight’s new episode, we have a full and detailed recap, right here for you!

On last week’s episode we saw the end of the Red John saga.  Jane finally got to meet the man who killed his family and he got to look into his eyes and kill him.  Once the dead was done he called Lisbon and told her it was over and he is going to miss her.

Tonight’s The Mentalist Season 6 episode 9 is going to be exciting, and you won’t want to miss. So be sure to tune in for our live coverage of The Mentalist — tonight at 10PM EST! While you wait for our recap, hit the comments and let us know how excited you are about this season of The Mentalist.  Check out a sneak peek of tonight’s episode below!

RECAP: Patrick is on an island, he orders scrambled eggs and tea in Spanish; he finds a person who can also speak English the same as him he mentions how he misses speaking English with another person since the island he’s on mainly speaks Spanish. Patrick asks the woman if the book is good, she asks if he likes murder mysteries and he says not really. The woman then asks Patrick if he wants to join her, he accepts and asks where she’s from south east Virginia and he got it right. The woman asks where his wife is, he says he’s not married anymore and she’s not married either and prefers being single. Patrick gets his breakfast order, a bus arrives and it’s the FBI head honcho cop that shut down his team in catching Red John.

The woman and Patrick are walking on the beach talking about work, the woman has been offered a promotion but she’s not sure if she wants it, she then mentions how beautiful it is here like it’s a dream world; Patrick says there’s nothing wrong with a dream world. Patrick tells her about his wife dying and that he doesn’t know how to talk about it, it’s also the cause of him wearing his ring still. It cuts to the FBI head honcho checking in at the hotel, he asks if and employee can speak English here, he asks if he’s seen Patrick and that if he does he should tell him because he bribed him. Patrick arrives at the bar he eats at, he introduces Kim the woman he’s been talking with to Rodger. The owner of the bar gets a call and it’s for Patrick, Franklin tells Patrick that there are FBI looking for Patrick right now. Patrick tells Franklin to find out more about them, he then walks on over and says everything is alright. Patrick needs to head up to tow and asks if Kim wants to come and says see ya around to Rodger. Patrick and Kim are in a store of some sort, and old man is talking to Patrick who bought a new shirt. Kim asks about Patrick having people to see, Kim asks if Patrick also knows a good place for dinner. Patrick is kind of surprised and asks if she’s asking him out to dinner Kim says yes and they agree to meet at 8:00PM. Patrick is talking to Franklin about the FBI that have arrived, and then there’s a man with a lousy temper. Patrick meets up with the FBI head honcho, and sits down with him to talk. The FBI head honcho wants to make Patrick an offer, that Patrick can be valuable for the FBI and they’ll drop all of his charges if Patrick accepts to work with the FBI. The FBI head honcho isn’t happy with this deal, but he’s just the messenger. Patrick isn’t buying the offer, FBI head honcho says that it’s a good deal and that Patrick should consider it; but Patrick is done with that life he’s done what he had to and there’s no reason to go back to it. The head honcho says that Patrick has a gift to help others, Patrick then retorts with saying it’s not a gift. The head honcho of the FBI says he’s staying for another day if Patrick changes his mind, Patrick wanted to know how he found him and the FBI head honcho mentions Teresa. Teresa is talking with Wayne and Grace about what they’ve done recently and it cuts to Patrick getting ready for his date with Kim. Patrick waits and meets up with Kim for dinner, then Teresa is down talking to Grace and Wayne again. Grace asks how’s Teresa doing, she says all is good; Wayne and Grace have been progressing in their life as a family. Teresa asks if Wayne misses the CBI he does, but he doesn’t miss it anymore because of how much time he has. Wayne and Grace have to leave because of their child’s fever and Kim says it’s cool. Kim asks how’s Patrick’s meeting went, Patrick says it was good he was given a job offer. Kim asks Patrick what he does and he says he looks for people, he mentions that it was actually fun. Kim asks if he misses it and he replies with of course. Patrick thanks Kim for the date, because he thought he never needed the company, but it turns out he did. Patrick asks Kim if she wants to go dancing, she agrees and they go. Teresa is opening a box, within the box is a letter. it shows Patrick dancing with Kim, while reading the letter Terea laughs a bit. Patrick and Kim are walking in the night, Kim believes they’re being followed and they are. Patrick goes to see what they’re doing and he gets beaten up.

Kim is trying to take care of Patrick after getting beaten up, she mentions how he should go see a doctor; but Patrick doesn’t want to and says he only needs to rest. It’s now morning, Patrick wakes up from bed looking like he’s in pain, he sees Kim making tea of some sort. Patrick says that he was very drunk last night and asks what happened, she tells him that he was beaten up. Kim hands Patrick some tea, and he really likes it. Kim got a text that she has to go back to work today, Patrick understands. She apologizes, but he’s fine with it. Kim gives Patrick a hug and mentions that she had a great tim with him. Patrick then sits down looking at his wedding ring and picks it up. Patrick is now back at his usually restaurant/bar place. Patrick is looking for the man who usually works there, he see’s the man burying his dog; turns out someone got drunk and ended up killing his dog. The man is digging in the sand, looking like he’s going to bury it Kim comes and sees Patrick sitting by himself; she was looking for him to give him something before she leaves. Kim says that he’s right and gives him her book. Kim gives Patrick her number and tells him good luck with his decision. patrick sits down and looks like he’s thinking hard, he looks over to Rodger and Rodger looks over to him. Patrick starts writing on a piece of paper and begins running. The FBI head honcho receives a call, Patrick says that he’s ready to come home on his terms. Patrick wants Teresa to be there or else he won’t do it. Patrick doesn’t want him to say she’ll be there and then she won’t, he wants to make sure. Patrick talks to Franklin about the drug dealer, Patrick needs Franklin to find out three things, when the deal will happen and what room it’ll be in, also where they’re located at. Patrick walks to talk to the Vietnamese people and says that one of the speak English, Patrick tells him that he knows he’s a drug dealer and wants to speak to them about an acquaintance Ortello; he tells them that Ortello has flipped sides and is working with a police officer. Patrick says that if they have business with him, they should be careful and walks away. Patrick tells the police head honcho he’ll be in a certain apartment exactly where the drug deal is happening. The Vietnamese man opens the door and sees the FBI at his door, the Vietnamese man looks pissed, and asks Ortello if he’s sold them out to the police. The police come in with guns aimed and tells them to un arm them selves and get on the ground. The police have found the drugs and made a successful bust. Patrick arrives with his terms written on a piece of paper, the FBI head honcho reads it and says he can work with it and will sign it and five more complies. Patrick kicks Ortello in the as and then they go. Franklin comes up and gives Patrick a hug and tells him something we couldn’t hear.

Patrick is now headed back into the US, he’s in the van looking around; they’ve finally arrived in Texas. Patrick gets out of the van and starts walking toward the FBI head quarters, with members of the FBI. Patrick enters and sees Cho sitting down in a chair. Patrick sees that Cho has joined the FBI. Patrick goes in for a huge but gets denied and pats his left arm. Patrick asks if Cho has a chip in his neck, though he’s happy to see Patrick he can’t show it. Patrick enters the room and sees Teresa there, she notices his beard. Patrick hugs Teresa saying that he missed her, she says she missed him too. Patrick sees the FBI head honcho, he tells Patrick all of the charges he had; that it could lead him to 20 years in prison unless he becomes a consultant for the FBI for 5 years. Patrick says that it’s interesting, Patrick tells him that he’s agreed to some terms, Patrick wants to work along side with Teresa only. Patrick says that he wants things in his terms, but he’s not getting his way. The FBI head honcho, tells Patrick that it’s either take his deal or not. Patrick sees Kim, who’s actually an agent here. Patrick accepts a detention suite, he has everything under control.