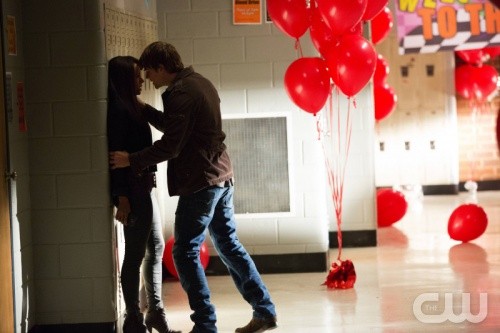 This week’s The Vampire Diaries episode was fantastic.  This season just keeps getting better and better!  From the preview we have seen, next week’s episode of The Vampire Diaries called “A View to a Kill,” is going to be intense and, as usual, we will be providing you with the juiciest, bloodiest, previews and teasers out there.

On tonight’s show Jeremy was furious when Klaus tried to control him by putting Matt’s life in danger. Damon coached Jeremy as he prepared to take on Klaus’ new vampires, but they find that Kol hadbeaten them to it. Kol made it clear that he will stop at nothing to convince everyone to give up the search for the cure. Looking for a new
ally, Rebekah reminded Stefan that they were once close friends. When Sheriff Forbes and Mayor Hopkins question Shane  about his involvement in the Founders’ Council deaths, Bonnie stepped in with questions of her own.  Did you see tonight’s episode?  We did and we have a full and detailed recap here for you.

Spoiler alert: If you’re one of those people who doesn’t like spoilers, stop reading now! We have some juicy spoilers for you about the season 4 episode 12 of CW’s “The Vampires Diary.”

CW Official Synopsis: DANGEROUS LIAISONS — When Rebekah (Claire Holt) turns down Klaus’ (Joseph Morgan) plea to stop Kol (Nathaniel Buzolic) and protect Jeremy (Steven R. McQueen), Klaus turns to Stefan (Paul Wesley) for help. After an angry confrontation with her father, Mayor Hopkins (guest star Rick Worthy), over his unconventional approach to ending the violence in Mystic Falls, Bonnie (Kat Graham) has a frightening run-in with Kol, followed by an unexpected visitor. Klaus complicates the already tense feelings between Stefan and Damon (Ian Somerhalder) by revealing a bit of Stefan’s personal life, then surprises Damon by asking for personal advice. Elena (Nina Dobrev) tells Stefan about her dangerous plan for Jeremy, leaving Stefan in a difficult spot. When the high school’s 1980s Decade Dance is cancelled by Mayor Hopkins, Stefan finds a charming way to make it up to a disappointed Rebekah. Brad Turner directed the episode written by Rebecca

On next week’s show Kol is out of control and he wants to hurt Jeremy.  Elena decides that she wants Jeremy to kill Kol.  Bonnie is shocked since Kol is an original and it would be dangerous for Jeremy.  Elena tells Stefan her plan for Jeremy.  Damon says, “If you are going to be bad, be bad with purpose!”  Kol comes to Elena’s house where she, Jeremy and Matt are.  He demands they open the door and invite him in, he kicks down the door.

Not only does Elena want Kol dead but Klaus thinks if they let Kol run free then they can kiss the map goodbye.  Jeremy realizes they need Bonnie’s help with Kol, but Bonnie has some trouble of her own.  Kol attacks Bonnie at Mystic High deciding if she is dead, no one can get the cure.

Rumor has it the love lives of Damon, Elena and Stefan will go through a change.  Klaus will reveal something of Stefan’s life that will not help with his relationship with Damon. I cannot wait for the episode!

The Vampire Diaries Season 4, Episode 12 “A View to a Kill” airs on the CW on January 31th, 2013. Check out the preview video  & some photos from episode 12 and let us know in the comments below what you think!