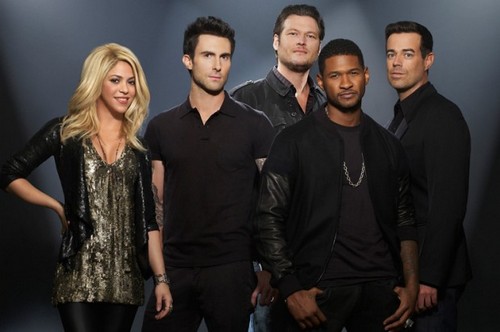 THE VOICE returns to NBC tonight as the Blind Auditions continue.  Last night was the premiere of the fourth season on The Voice and the first night of Blind auditions where contestants sang in front of this season’s coaches Adam Levine, Blake Shelton, Shakira and Usher.  Did you watch last night’s episode?  We did and we recapped it here for you!

On last week’s show The Voice premiered with new coaches and new contestants.  Last night the Voice proved that unlike other talent competitions like American Idol and The X Factor the Voice can change coaches and the show can survive.  The show is more polished, more professional and it is no surprise that it is successful.  Last night’s premiere had 13.4 million viewers and a 4.7 rating among adults 18-49, easily winning the night.

On tonight’s show the “Blind Auditions” continue with Grammy Award-Winning vocatlist Adam Leving, Shakira, Usher and CM Entertainer of the yar Blake Shelton – The “blind auditions” continue and are held in front of a celebrity panel of coaches including, Adam Levine, Blake Shelton, Shakira and Usher. The strongest vocalists from across the country compete to be selected by one of the coaches and fight for a chance to win the title of being named “The Voice.” Christina Milian (“Be Cool”) serves as Social Media Correspondent and Carson Daly (“Last Call with Carson Daly”) hosts.

Tonight’s “Season 4 premiere Night 2” is going to be an exciting one, which you won’t want to miss. So be sure to tune in for our live coverage of NBC’s The Voice – tonight at 8PM EST!   While you wait for our recap, hit the comments and let us know how excited you are for the new season of The Voice.