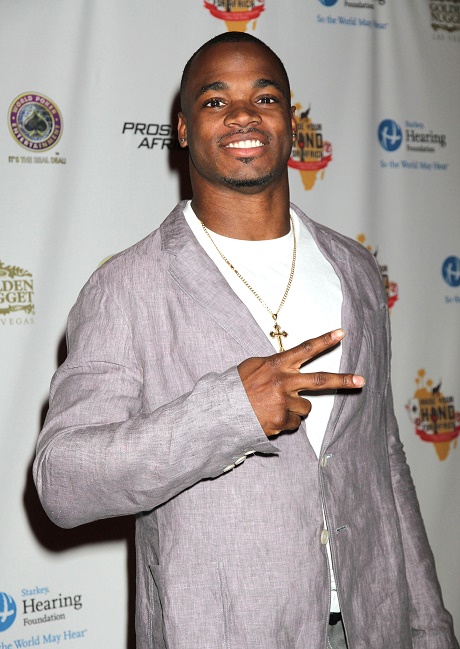 Minnesota Vikings NFL player Adrian Peterson has been indicted for child abuse in North Montgomery County, Texas. Sources tell TMZ Sports the alleged victim is his 4 year old son from Minnesota who was visiting Peterson back in May at Adrian’s home in Texas. When the child went back to his mother, she noticed injuries and took him to a doctor. The doctor then contacted authorities to report Peterson. Last October, Peterson’s 2 year old son died from being abused by his Mother’s boyfriend and now he’s allegedly abusing a child.

Child Protective Services has confirmed they’re working on a case involving Peterson. Peterson didn’t show up to Vikings team practice yesterday. The team tried to explain it as a “veteran’s day.” He showed up today and was said to be laughing and joking on the field.

Peterson posted a picture with this quote: “People understand that if you are on God’s course and suppose to have that position and man decides to remove you know that God will remove everyone to place you rightfully! You matter!” And: “Its your season! Weapons may form but won’t prosper! God has you covered don’t stress or worry!”

We are unsure if was referring to his latest predicament. As of 3:34 PT, Peterson had released this statement through his lawyer: “The charged conduct involves using a switch to spank his son. This indictment follows Adrian’s full cooperation with authorities who have been looking into this matter. Adrian is a loving father who used his judgement as a parent to discipline his son.

“He used the same kind of discipline with his child that he experienced as a child growing up in East Texas. Adrian has never hidden from what happened.”

“He has cooperated fully with authorities and voluntarily testified before the grand jury for several hours.”

“Adrian will address the charges with the same respect and responsiveness he has brought to this inquiry from its beginning. It is important to remember that Adrian never intended to harm his son and deeply regrets the unintentional injury.”

Pictures show cuts on the boy’s thigh and hands. He also had bruises on his lower back and buttocks. Peterson has admitted to spanking him, but says it’s not abuse.