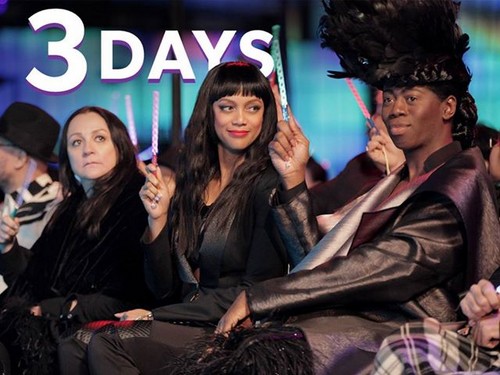 Tonight on CW Tyra Bank’s America’s Next Top Model continues with an all new Friday December 5, cycle 21 two hour special finale called “The Last Girl Standing” and “America’s Next Top Model Is…,”  and we have your weekly recap below.  On tonight’s episode Tyra introduces the final four models to her cosmetics line and challenges them to a commercial shoot with help from some of the previously eliminated contestants. Later, the models participate in their last photo shoot.

On the last episode the five remaining models performed a bilingual scene with Korean soap opera actors before tackling a night-time photo shoot that had them dressing up to recreate iconic images of the King and Queen of American pop culture: Elvis Presley and Marilyn Monroe. But history came back to haunt the models when each was asked to confront demons from their past. Did you watch the last episode? If you missed it, we have a full and detailed recap right here for you.

On tonight’s episode as per the CW synopsis, “in the end three very strong and different models are judged in a high-octane final runway fashion show in Seoul for designer Lie Sang Bong. Tyra Banks joins judges Kelly Cutrone and J. Alexander, along with photo consultant Yu Tsai to calculate the contestants’ final scores based on their entire body of work, while the finalists reminisce about their journey to become Cycle 21’s America’s Next Top Model. Special performance by Kpop band 2NE1.”

It’s down to the final four on tonight’s two part finale of “America’s Next Top Model”. And the stakes are far too high for anyone to mess up now.

Adam had slow down on his drinking and had even won best photo last week. So he’s feeling good about where he is in the competition. And as for Will, his self-confidence has grown over the last weeks. He started the competition as a young gay man coming from small town in Texas. Yet he didn’t let that break him and eventually he grew to be a very serious contender.

And Keith, well he always took the competition seriously though he never lost his cool like everyone else has done at one point in time. The closet he’s ever been to losing focus was back when Mirjana was there. Mirjana was just one of those people no one seemed to like. So, it’s unfortunate she was brought back for the finale.

Tyra is giving the Fab Four one last chance to impress her. A while ago, Tyra had started a makeup company and now she wants the models to advertise it in a new commercial. So not only is Tyra their latest client but she also made things harder for the models by bringing back some of their old foes. Including Mirjana and Chantelle.

Funnily enough, when it came time to pick team, Mirjana ended up on Keith’s. And no one wanted to pick Chantelle so she was the last pick.

Adam never had a bust up with Chantelle. So she was the best fit for his team. Though surprisingly, she’s the only one that’s hoping for Adam to win. Everyone else doesn’t think Adam should have made into the top four. He’s been called a bad example and his own team member Kari has said Adam is too much of a frat boy. As if that’s so terrible and he hasn’t been working on himself. Yet they failed to understand how much Adam has given up to win this competition. He was on course to finishing grad school when he dropped out to pursue modeling. So he is serious about it.

And Lenox like usual doubted herself when she was told she had to do another commercial. The last commercial she was in wasn’t that good. But she pulled out her best for Tyra. In the end, Lenox probably received the most positive feedback.

The guys on the other hand weren’t so lucky. Yu Tsai stopped screaming at Keith almost as if he had given up on the model. And Will was once again self-conscious. He was doing really. Then they told him he would have to do his commercial topless. So he didn’t feel like himself again until after Raelia drew abs on him.

Afterwards, the models all got the chance to hang out and Adam’s drinking came back up again. Adam claims his drinking has never affected his modeling which in itself is a lie because he says he feels looser when he drinks. And when he doesn’t, he tends to get criticism about being too stiff. So he could be doubting himself whenever he’s not had a few in him.

Also Adam heard from Tyra about his drinking so it is noticeable. But he doesn’t seem to feel that way and no one else wants argue with him about it.

The models’ last photo-shoot was for Guess. And immediately after finishing it, the judges crashed the set. They were watching the photo-shoot from behind the scenes and they were judging the photos as the models were taking them. So they’ve already chosen best photo and who’s going home.

Adam won best photo again and that won him his place in the final three. But some people are being sour grapes about it. Like Lenox for instance. She didn’t think Adam should have won. And she’s just as concerned about his often out of control drinking as everyone else.

Then Will won second place and Lenox decided to stop focusing on Adam and starting more about herself. Both Lenox and Keith received some negative feedback on their Guess photo-shoot. Hence they were neck and neck in the competition. Ultimately, though, it was Lenox’s confidence and lack thereof that sunk her.

Lenox couldn’t pull off sexy because she didn’t believe she was sexy. And when she left – the competition came down to all guys. Now for the first time in ANTM’s history, a guy is going to win!

But, again, no one wants it to be Adam. He went back to their room and celebrated winning top photo by having a drink. Which is something they’ve all come to expect from Adam. However, he might have already started rethinking some of his choices. And that’s all thank to the treat Tyra allowed them to have.

The top three were allowed to call home and Adam got to talk to his parents. Apparently, they had warned their son about taking modelling seriously seeing as he dropped out of school. So Adam might just shape up now.

Yet it could be too late for that. The top three models have only one thing left to do on their agenda and that’s to make a great impression on the runway. Each of them have strengths the others don’t have, but Adam still isn’t taken seriously by his competitors.

Will thinks he only has to contend with Keith. But it’s Adam that’s getting the best feedback. The runway fashion show did not showcase any of the guys in their best light. And that was unavoidable. Some of them had tried to take their critique and correct themselves. And it didn’t work out.

Will ended up looking stiff, Adam was a bit too comfortable up on the runway, and Keith was finally able to relax. Keith is typically told he has one look but he’s been concentrating all his efforts on correcting that and Yu Tsai hasn’t even yelled at him.

Earlier, the other models had thought the non-yelling was a bad sign but as it turns out it was merely an indication of better communication. It seems Keith and Yu Tsai have come to a truce and that can hopefully save him when it comes to panel.

Later, when the guys came before panel for the last time, they knew their entire body of work was going to be analyzed. Yet they didn’t know how hard it was going to be to hear how well they’ve done or how far they’ve fallen.

All of them were at one time doubted by the judges. So to stand there and take whatever was dished out was hard on them.

But what kept them going was the hope they would win in the end. And sadly only person can do that. So the first guy to be eliminated from was Adam. His social media scores simply weren’t as high as that of Will’s and Keith’s.

And as for the other two guys, the the first male winner of America’s Next Top Model is……………………………….Keith Carlos! The kind and humble guy that started this competition in order to be a model and help get his family out of the projects is the same guy that won it all! Keith Won ANTM!

Meanwhile, just because Will may have been defeated, this definitely won’t be the last we’ve seen of him! Like Tyra said, he is a beautiful man!