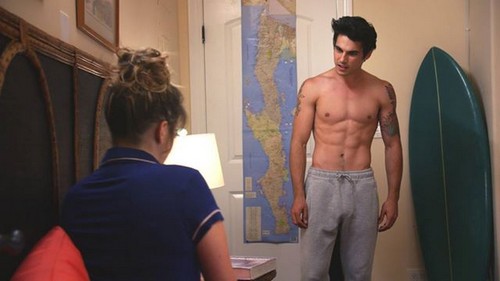 Tonight on MTV their comedy series AWKWARD about an under-the-radar teen continues with an all new Tuesday November 18, season 4 episode 20 called, “Sprang Break, Part 1.” On tonight’s episode, the gang head to a beach house in Mexico.

On the last episode, the stress of college applications and boy-related drama plagued Jenna’s final Spring Break. Did you watch the last episode? If you missed it, we have a full and detailed recap right here for you.

On tonight’s episode as per MTV’s synopsis, “the students enjoy spring break at Ally’s rental beach house in Rosarito, Mexico.”

Lacey and Jenna are stopped by a cop on the way to Mexico. Jenna is scared they’ll be kidnapped. Lacey flirts with the cop and calls Jenna her sister. Jenna is glad Matty is coming for spring break. She’s checking her email and then screams scaring the cops into pulling their guns. Lacey tells them it’s okay and says her sister just got into college. They show up and see the beach house is not near the beach. Val is there and hugs her saying she’s relieved. Val shouts that they’re on spring break and to max this mother fondler out.

Ally complains about Lacey bringing little bitch and is already mostly drunk (of course). Lacey shouts out to all that she got into college. Tamara asks where and Jenna says Wicoff. Sadie tells her she’s going to be mediocre forever. Lacey tells them they almost got murdered and Val and Ally pour more booze. Matty thanks Jenna for pushing him about his bio-dad. He says she gets him and she says they get each other. He says he’s waiting to hear from his dad and says they should max out their last spring break together and she wonders if he means they are “together” or together. Either way she’s happy.

Sadie complains to Sergio about not hearing about her scholarship and he tries to get he to relax. She says he’ll probably be a cop like his dad and he tells her she’s smart and beautiful and will be just fine. Val has brochures on a bunch of stuff and says she wants to swim with dolphins. Jake tells her dolphins aren’t fish and she asks how they breathe water then says her cats are fish too. Jake says they’re going to the beach and Ally says she hates kids that don’t know how to party.

Jenna sits on the beach and watches Lissa drink and curse. She gets a text from Tyler saying he’s on the way. She says she’s going to screw his brains out and asks Ally if that’s okay. She tells her to throw down a towel so she can get her deposit back on the rental. Matty tells Jenna he’s meeting his bio-dad tomorrow and asks her to come along. She agrees.

Lacey asks Val how long she’s going to wait and she says until Biggie comes. She says he told her to wait there and her love is blind and unconditional. They see a hottie coming out of the ocean and Lacey says she didn’t know he was packing all that. Val runs to her honey and they kiss. Some Japanese tourist teens see Jake and Tamara and get really excited.

They ask for photos with them, recognizing them from Jake’s music videos. Jake and Tamara tell the others they are huge in Japan. Jake says they’re going to make another video and monetize all the hits they’re getting. Lissa is twerking when Tyler shows up. He says it’s a whole new her and she’s ready for sin. He’s shocked.

The adults are headed to Tijuana but the kids stay around to party there. Next day, Jenna and Matty are going to see his dad but then Gabby shows up at that moment. Jenna is crushed. Matty hugs Gabby and mouths “I’m sorry” to Jenna. Lacey asks her what happened with Matty and she tells her Gabby showed up. Lacey tells her not to finish senior year focused on Matty and says to focus on herself.

She tells Jenna to relax and live in the moment. Ally, Val and Biggie look pretty bad the next morning. Theo and Cole crank up the music and Val says they saw a donkey show. Ally says it was the most disgusting thing she’s ever seen that she’s not a part of it. Lissa tells her the world is full of crazy stuff and hauls Tyler off to bed again.

Sadie’s phone beeps and she hops off Sergio and tells him she f-ing got her scholarship and high school will soon be a bad dream. Post-coital, Lissa says that’s what they’ve been waiting so long for. Neither seems really thrilled. Jake is working on a new song. Tamara says she loves it. Theo and Cole mock him. Tamara says the Japanese girls like them together and she asks Jake why they ever broke up.

He tells Matty he’s so stoked he looked him up. He asks if he’s an athlete and tells Matty he played football in school but was more into surfing and smoking out. Matty says he plays soccer and is hoping for a scholarship. The guy is a stoner loser. Jenna’s new guy is a Marine and he says he’s shipping out for his first tour of duty in a few days. He says he wants to study San Diego and that’s why he’s in the military – to pay for it.

She says he seems so together. He asks if she wants to swap numbers so he can see her again before he goes. They do. Tamara complains about the video shoot. Tyler says he can translate the comments since he knows Japanese. He’s a little surprised and then doesn’t want to read them but Lissa tells him not to be a pussy. He says they say it’s hilariously amateur and thinks Jake looks like Leonardo di Caprio.

Tamara takes offense and Jake says she was ready to marry him and move to Tokyo. He calls her needy and greedy. Tamara says this is over and she’s out. Theo asks if he’ll smash his guitar. Sadie says the West Coast is so over and Sergio tells her to take down the hate but she says he’s stupid. He’s getting mad. Gabby and Matty come back and he tells them they went to meet his bio-dad.

Gabby says his dad was cool and they have the same smile. Gabby says she’s glad Matty wanted her to come along. Lacey asks if he’ll see the guy again and he says probably. He tells Gabby to hang out with everyone and says he’s exhausted. Jenna says he obvi wants to talk to her but she’s thinking about Brian and how small all this will seem again.

Lissa asks Tyler if he wants to f- or get churros. She says it’s not as fun like this and they agree when they weren’t allowed to be together, it was more fun. They agree to quit while they’re ahead and part with a kiss. He gives her a peck and goes. Sergio tells Sadie she’s being horrible to everyone else. He tells her she’s a heartless bitch and he gets dressed to go. She asks him not to go.

She says she’s sorry and he tells her to be nice while she’s still got him around. She tells him he’s a lot of work and he laughs. Jenna goes to check on Matty and finds him in his room. He says he’s fine and she asks if that’s it. He says Gabby is right down the hall and he doesn’t want her to see them together. He shuts the door on her and she’s upset. She says she’s okay with that and says if he wants to close the door in her face, she’ll close the door on him too.