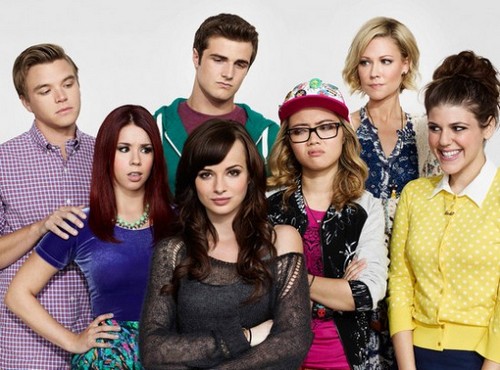 Tonight on MTV their comedy series AWKWARD about an under-the-radar teen airs with a new episode called, “My Personal Statement.” On tonight’s episode Jenna and Tamara face the possibility of a future apart.

Last time on Awkward Jenna and Tamara headed on over to the college SCU to go see Luke and met some real men, but things didn’t go exactly to plan. Matty and Jake ended up going to jail to spend the night and Tamara hooked up with someone unexpected.  Did you watch last week’s episode?  If you missed it we have a full and detailed recap, right here for you.

On tonight’s episode Jenna and Tamara hit a bump in the road and view the possibility of separate futures; will they separate? Is Reed going to leave the show? Will Jenna go off to college with her new boyfriend Luke? Meanwhile, Eva plots to keep Matty and Jenna ousted.

Jenna gets ready for school and talks about how she’s kicking butt at school and on her college applications. Her mom says she should pick a cool font or color that pops. Jenna says that sounds desperate. She says Luke is helping her. Her dad asks her mom to friend him on social media. He’s excited about keeping track of her while she’s at college. Luke and Jenna complain about parents and social media.

She’s freaking about her essay that he’s critiquing. He tells her it’s great and says she’s college material but says he has to go to class and says maybe next year she’ll be going to class with him. Her dad is loading up her page with baby pictures and she screams at him.

Tamara and Lissa talk about college applications. Lissa says she’s only applying to Christian schools but also applied to the Mormon one even though “they’re not really Christians” and says Utah seems nice. Sadie tells Jenna she’s a filthy scat queen for all her dads potty training photos. Tamara insults Jake and then he asks what school will get the two of them. Jenna says they’re keeping their top picks secret. They talk about hitting yes on their applications together that night.

Matty and Eva roll in holding hands. Lissa says she’s pretty and walks on a cloud and Sadie says it’s more of a shit storm. Matty asks Jenna for the personal statement she helped him with. He gives her attitude but she ignores him. Eva asks if she’s okay with her and Matty and says she would shut it down if she’s not cool with it. Jenna says it’s fine and Eva says they should hang.

She tells Jenna that Matty is romantic and says she likely knows that. Val worries about her reunion outfit and Lacey tells her to show her legs. She gives her a necklace as Val talks about Stevie, the hot guy. She says she hired Sadie’s food truck for catering. Lacey has her all done up except for a dress.

Tamara and Jenna are ready to hit send. She realizes she didn’t send Matty his essay and Tamara asks what his problem is. Jenna says she can’t care if he’s being a dick and sends the essay. He tries to check his texts while driving and Eva tells him not to. He asks to see if she sent it. She glances through his texts and then deletes is from the phone. She says she hopes Jenna isn’t blowing him off. Looks like she was shocked at all the texts between the two of them.

Tamara says they need to document the moment and takes a selfie. Jenna is mad at her dad about his pics posting and Tamara says they have to clean up Jenna’s skanky digital footprint before she sends her application. She says college admissions check this stuff. They get ready to clean it up – what Tamara knows since she’s been catfishing.

Sadie barks orders at Jake and Lissa and chews Sergio out and calls him a cholo. He tells Sadie that if he was sexually harassing her she would know it. Lacey comes into the reunion and drags Val in who looks great but is very nervous. She says she feels naked without her fanny pack.

Stevie rolls up on them and asks who they are. Lacey says she didn’t go there but Val did. Lacey tells him that Val planned the whole reunion. She starts babbling and he walks off. Erica comes over and calls her Valgina and says she looks good. She asks if she had work done and Val says just bunion surgery.

Lacey is sad about the Valgina and says Erica started a rumor she was a hermaphrodite. Tamara snaps pics of Jenna reading and looking smart. They upload these as the doorbell rings. It’s Luke with champagne. He wants to celebrate her apps going on. She shows him what Tamara did to her online profile. Tamara says she can leave but Jenna tells her not to go. Tamara says it’s sagic (sadly tragic) that she’s the third wheel. Jenna tells Luke they had a girls night planned and he offers to take them both for fro-yo. Jenna says bestie festie is back on and Tamara snaps a pic of them for her page.

Lissa tells Matty she’s excited about the restaurant and he’s distracted and says he can’t believe she hasn’t sent the essay yet. She says she doesn’t know what’s up with that and snaps a selfie of them.

At the reunion, Sadie threatens Sergio then hands a guy a raw hotdog and tells him good luck with undercooked pork since he’s being impatient.

Eva talks trash with Matty about Jenna and then shows him Jenna’s post that she’s sent in her apps and is out for fro-yo. Matty is furious since he can’t send his applications until Jenna sends him the essay. Eva asks why Jenna would do this to him and asks if Jenna would deliberately try to hurt him and Matty says she has before. What a beeotch!!! OMG!

Lacey tells Val not to let Erica ruin her life. She tells her to go ask Stevie what he does since guys like to talk about themselves. She goes and asks what he does – he’s a high school gym teacher and she tells him she’s a counselor. Stevie says he thought high school sucked for her. She says it did but she likes it now. He tells her that he got a room and asks if she wants to see it. She says she does and follows him.

Jenna acts inappropriate with a straw and asks Tamara if this would be a bad thing to post to her wall. Tamara says definitely not and Luke says it could be listed under special talents. Matty rolls up hot and asks why she didn’t send the essay. She says she sent it hours ago. She says she’s with her BF and BFF and that she will resend it when she gets home.

Matty calls her selfish and Luke takes up for her. She says he can go get it himself since he knows where her key is. He thanks her sarcastically for her help and she gives him the attitude back.

Sadie gets a complaint about the food and Lissa tells her to stop being a mean nasty bitch. Lissa tells her to stay in the back and cook or she and Jake are leaving. Val comes back to the reunion looking disheveled and tells Lacey that it was tiny and his P was more like a V. Erica hears and is outraged accusing her of having sex with her husband. She didn’t, but they did fool around a little.

Val says if that’s the kind of uninteresting loser that supermodel Val attracts, she’d rather be plain old Val and Lacey says that’s who she prefers. She asks if they can get out of there.

Eva says it’s nice that Matty can get into Jenna’s bedroom anytime he wants. He sends the essay and Eva pulls him onto Jenna’s bed. She tries to get him to fool around and he says they’re not in competition but refuses to fool around with him there. She says she saw all the texts on his phone and he deletes them all. He says that Jenna is deleted. They kiss and go to leave but then she says she left her phone and ducks back into Jenna’s room. She comes back out and they lock up and go.

Jake tells Lissa that it was cool how she shut Sadie down. She tells him that he’s changed too because Tamara used to yank him around. They agree that change is good. Tamara and Jenna both hit send on their apps. They are happy and sad because they know it will mean the end of them. Tamara says it was cool of Luke to include her. She finds panties in the bed and Jenna says they are not hers. They assume those are Eva’s and that they boned in her bed. Jenna is furious.

Jenna’s personal statement says she was invisible when she started high school but has since found her voice. Eva walks up and Jenna says she left them in her bed. She says you know how Matty is and Jenna says she and Matty may be on the outs right now but she knows Matty McKibbon and knows he would never f- her in her bed. She tells Eva she doesn’t know what games she’s playing, but she’s out. She turns to walk off and Sadie is there with Tamara and Lissa. Sadie says she has nothing to say (for once) – meaning she’s glad she let the bitch have it. Go Jenna!