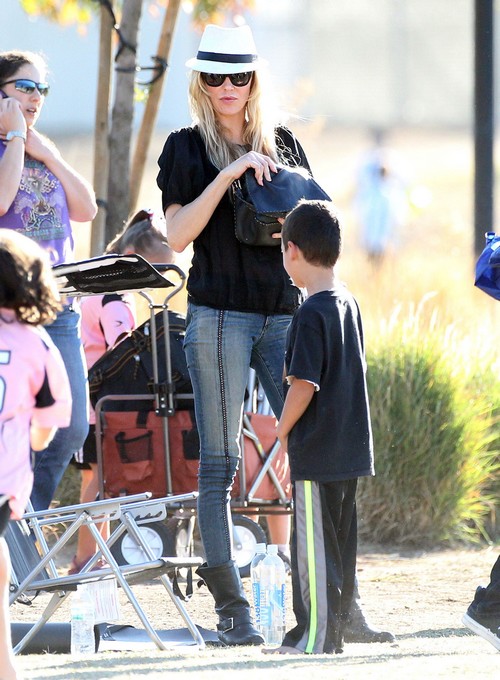 Brandi Glanville has a knack for keeping us entertained…usually in some unusual way. But now, she has really hit a new low and you can bet LeAnn Rimes and Eddie Cibrian will be all over this story as they fight for custody of the two kids Eddie and Brandi share.

Brandi has been slammed before for oversharing and being inappropriate on her podcast, but the fact that she is now talking about her youngest son Jake in such a degrading manner on her show is going to really cause her major backlash, and will hopefully end with a mental evaluation followed by parenting classes.

Brandi went on her podcast and dished with guest Jake Lacy. RadarOnline reports that as part of their conversation, Brandi said, “My son’s name is Jake: He’s 7, he’s a complete a**hole, but we love him. Oh man, he’s a d*ck, seriously.” She explains that he neglects to do things she asks him to. So….basically he is like most seven-year-olds. She says that when she calls him on it, he doesn’t bother to try and get out of it, simply saying, “I lied” she tells her guest. She says that Jake follows up his defiance with showing his dimples. It has to make us wonder if Brandi even considers the fact that Jake may be defiant because he 1) needs quality attention 2) likely knows he can get away with things because he can play his mom against his stepmom and always win, and 3) has zero respect for his oft-drunk mother.

Speaking of Brandi’s drinking, you’d think she’d recognize her need for rehab, but no—instead she jokingly shares that she is already planning rehab for her youngest born because of his shenanigans. And in another bash to her own parenting skills, RadarOnline shares that Brandi told her guest that “a problem on the horizon is the tot’s popularity with the ladies. ‘He’s basically got to second base with a lot of chicks already!’ she said, noting that the first-grader had a fifth-grade girlfriend.” Disgusting; especially the fact that she seems to be proudly sharing this news. He’s only seven and she has zero control over him and he has no respect for her. This is a complete recipe for disaster.

Not sure why Brandi was so callous and careless in the way she talks about Jake, but she goes on to brag about her wonderful sweet son Mason, who she describes as “her baby.” I guess Brandi is not one of those moms who, when asked who her favorite child is, replies “I love you all the same.” She even claims to tell Jake “Go f*ck yourself” and calls him a “f*cker” in passing RadarOnline.com shared. Her reckless parenting, and horrendous comments will surely come back to haunt her; not only by her poor son as he continues to grow up damaged by her, but by LeAnn and Eddie who are likely talking to attorneys as you read this to find a way to finally gain full custody of the boys.

We promise to keep you posted on this scandal because we guarantee this is only just the beginning…this will turn into a war! Okay CDLers, especially Brandi fans—we want to know what you think about her comments.