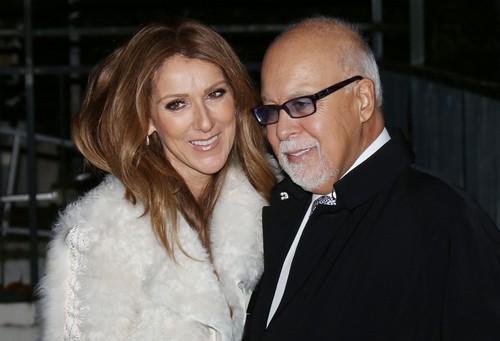 Celine Dion is putting on heck of a brave face of the public and the media. According to reports, Celine’s husband, Rene Angelil, stepped down as her manager because of his ailing health.

A report from the National Enquirer claims that Rene just had a cancerous tumor removed from his throat, and both he and Celine decided that he just wasn’t fit enough to be her manager anymore. A source tells the Enquirer, “In a sad move that signals René may be fading, he and Celine decided it’s best he no longer make her every career move. It’s painful to both of them because René has been her manager since he discovered her as a teenager in Montreal.”

Rene is 72 years old, so his deteriorating health shouldn’t really come as a surprise. None of Celine’s millions are going to be able to battle the effects of aging, even though it’s probably devastating for her that she can’t do as much as she’d like to do for her husband. The Enquirer’s source also added that Celine kept on a brave face for her children during the holidays, but she and Rene have reportedly been flying back and forth between their home and the specialists in LA.

We wish Rene a speedy recovery, and hope he gets better soon. It’s tough to have a loved one in the hospital, especially when there’s so much public speculation surrounding their health. Many people were suspecting breakup and divorce rumors for a long time, but it looks like it might just be something much, much worse.

For now, Celine’s career will reportedly be managed by their longtime friend, Aldo Giampaolo, who also used to head Cirque du Soleil’s business unit. He’s clearly qualified, but Celine’s bound to be disinterested in her career for a while.