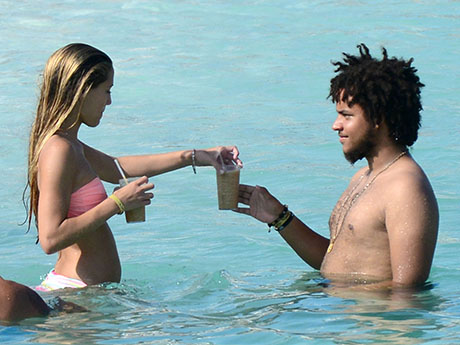 Tom Cruise may be an absolute diehard Scientologist but none of his family seems to be following his lead. Instead of choosing a life deeply connected to the, er, church 19-year-old Connor Cruise has instead opted to enjoy a life traveling from one DJ-ing gig to another. Of course there is a whole lot of partying going on in between and it’s beginning to show in Connor’s appearance. According to the May 26th print edition of The National Enquirer, Connor has been photographed smoking cigarettes and looking awfully bloated lately — two things which Tom does not approve.

Apparently Tom was over the moon when Connor spent a hot minute dating Alanna Masterson, a 25-year-old actress currently starring on The Walking Dead, but that ended as suddenly as it began. Alanna is a devoted Scientologist and Tom was hoping that some of her solid beliefs would rub off on Connor. Instead, Alanna’s father refers to Tom as “The Prince of Darkness” and all but forbade her to date Connor.

That rejection doesn’t seem to have been to difficult for Connor to take as he was spotted partying and frolicking with a mystery blonde in Mexico. My guess is that Tom is having a much harder time with it because it means one less situation to help keep his son in check. Do you think that Tom sees Connor’s weight gain and smoking as a sign that he might be living life a little too hard in the fast lane? Is Connor better off like this than being a Scientologist living under his father’s thumb? Tell us your thoughts in the comments below!