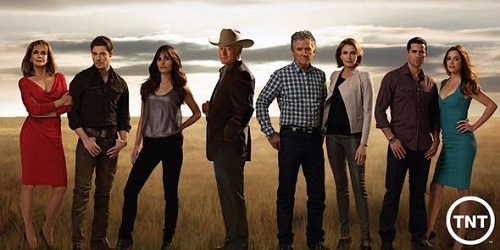 TNT shocked diehard Dallas fans this month when they announced after the Season 3 finale of the TV drama that the series was cancelled. Since the cancellation, fans and members of the cast of the reboot have taken to the internet to try to and save the popular series. Fans have formed Facebook groups to support the show, signed dozens of petitions protesting the cancellation, and have even started letter writing campaigns to the production company pleading with them to find another network to air Dallas on.

GLOBE magazine has joined fans in the campaign to save Dallas, and the November 3rd issue features a few words from Dallas star Audrey Landers. The actress, known to fans as Afton Cooper, is encouraging fans to fight the cancellation with her. Landers told GLOBE, “We want the fans who have loyal through the incarnations of the show to continue their support. To help save the show we need to reach out to the original fans and get them behind the new series. I hope the producers and networks will listen to the fans who have been supportive in trying to bring Dallas back.”

Landers is not the only cast member to step up to bat for the series. Patrick Duffy also took to social media to encourage fans to protest the cancellation. The odds of TNT changing their mind and cancelling the cancellation are slim to none, however if enough fans rally behind the primetime drama there is a good chance another channel will pick up the series, or even an internet based company like Netflix (who has revived more than one TV cast-off over the last few years).

So, Dallas fans, have you joined the online campaign to save the popular TV show? Do you think the efforts are futile, or is there a chance another network will pick up the series? Would you be willing to settle for Season 4 of Dallas on Netflix? Let us know what you think in the comment section below!