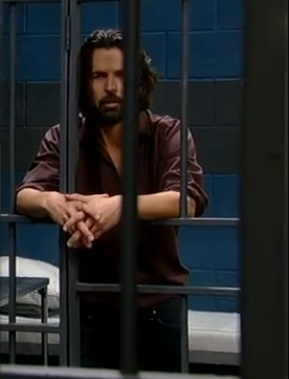 ABC’s daytime soap opera General Hospital boasts some pretty scary mobsters, but it is safe to say that Ava Jerome is leading the pack right now. (Then again she doesn’t have much competition – Sonny is currently talking to ghosts and Julian is being ordered around by a crazy old Luke Spencer imposter.) Ava, a ruthless cold-blooded killer took it to a whole new level last week on GH when she actually threatened innocent and pregnant Sabrina’s life, if Carlos considered ratting her out.

ABC has released a General Hospital spoiler video for next week, and it looks like Carlos establishes an unexpected alliance with Franco. In the video Carlos is sitting in Port Charles Police Department’s jail cell speaking to Franco. He confesses to Franco that he loves Sabrina, always has and always will, even though she is pregnant with another man’s baby. He goes on to explain that Ava Jerome knows that and has threatened to harm Sabrina if Carlos rats her out to the PCPD. In the spoiler video Franco attempts to make a deal with Carlos. He agrees to protect Sabrina from Ava and get her out of Port Charles on one condition, he wants Carlos to tell him what Ava is hiding.

So, does Carlos rat Ava out in order to secure protection for Sabrina? Well, that’s a good question because the video cuts off before he makes a decision. However, other General Hospital spoilers have teased that Carly and Franco decide to tell Anna the truth they discover about Ava, and Carlos mentions that he will “do anything” to protect Sabrina, so all signs are pointing to yes-the henchman decides to spill Ava’s dirty secrets to Franco. Also, General Hospital spoilers have been leaked that Sabrina’s baby is in danger and she experiences a complication with her pregnancy – and this involves a car accident with Ava possibly the culprit. Some GH fans are speculating that maybe Ava gets to Sabrina before Franco, and she makes good on her threat to harm her if Carlos rats her out.

What do you think General Hospital fans? Will Carlos tell Franco that Ava tried to kill AJ Quartermaine, and shot Connie in cold blood? Do you think Ava has anything to do with Sabrina’s upcoming pregnancy complications? Let us know what you think in the comment section below, and check CDL tomorrow for more General Hospital spoilers.