General Hospital Spoilers: The Young and the Restless Michael Muhney and Billy Miller Brought To ‘GH’ by Robin’s Return? 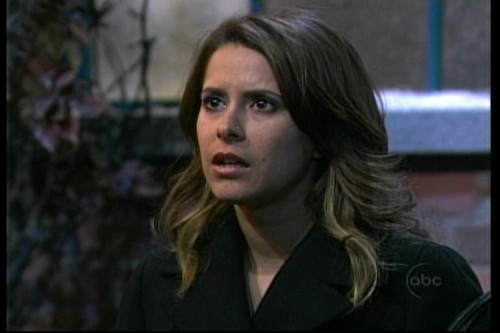 Well, that was quick! I’m talking about Kimberly McCullough‘s departure from General Hospital last March and the fact that she’s already back on set as Robin Scorpio. Back in March, the veteran actress was leaving after a 6 month stint in Port Charles because her heart was with directing and she needed to move in that direction. A few weeks after wrapping up her work on General Hospital, Kimberly was spotted over on the Grey’s Anatomy set proving that her talent does indeed match her ambition.

What about Michael Muhney? There have been unsubstantiated rumors going around that Michael has been given the nod to play a back from the dead AJ Quartermaine! Yes, I know this sounds far-fetched – extremely far-fetched but we’d be remiss if we didn’t at least bring it to your attention. Of course AJ is dead but die-hard fans point out that he died and cam back to life before so why not again? In any case, is there a possibility that Robin will tow with her  to Port Charles not only Billy Miller cast as Jason Morgan but also Michael Muhney cast as AJ? We think that the first is likely but not the second. Too bad though because Michael needs a job and his fans need to see him on screen soon!

Kimberly herself tipped off soap fans to the fact that Robin is returning to Port Charles by tweeting a photo of her new GH script and teasing that it was only her lines. So why on earth is Robin headed back to town? Well, she left to find Jason Morgan and my guess is that Robin will be returning with him or, at the very least, she will be ushering the character back onto the canvas after an 18 month absence.

When we last saw Jason, he had been played (for 20 years!) by Steve Burton who is now quite comfortable in Jill Farren Phelps’ pocket over on The Young & the Restless. That means a recast is in order and after 6 months of teasing fans about Jason, now is the perfect time to bring him back.

Rumor has it that Billy Miller signing on for the role was pretty much a done deal. That means that a load of former Y&R fans will likely follow him into Port Charles and, if a core character does a smooth enough transitional scene or two, then GH fans will probably be a whole lot more accepting of the change. I’m betting that is why Robin is returning — because if we see her connect with Jason in a few scenes, then the recast will be accepted a whole lot faster than if he was just thrown into the mix haphazardly. Plus, Kimberly likes to return to GH when there is a good, logical reason for Robin to be there. Nothing makes more sense right now than for her to return with Jason, don’t you agree? As far as Michael Muhney popping over to GH this summer as AJ Quartermaine that is probably more likely wishful thinking on fans’ part than reality.