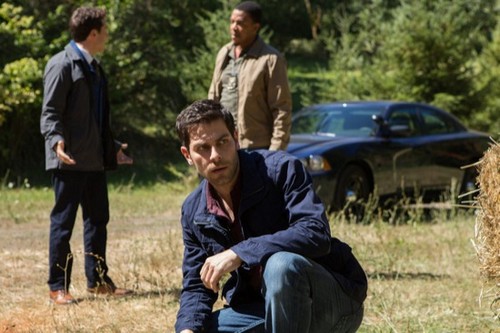 On the last episode after Nick (David Giuntoli) had a bizarre, unsettling vision, he and Hank (Russell Hornsby) found themselves on a case that took them into the world of boxing. Trubel (guest star Jacqueline Toboni) fund herself under the watchful eye of Agent Chavez (guest star Elizabeth Rodriguez) before jumping into the ring to help with Nick’s investigation. Meanwhile, Monroe (Silas Weir Mitchell) and Rosalee (Bree Turner) got some unexpected help in figuring out a way to restore Nick’s Grimm abilities. Elsewhere, Adalind (Claire Coffee) encountered a mysterious visitor in her dungeon cell. Bitsie Tulloch, Sasha Roiz and Reggie Lee? also starred. Did you watch the last episode? If you missed it, we have a full and detailed recap, right here for you.

On tonight’s episode as per the NBC synopsis, “AN ANCIENT EVIL ARISES AND CONSUMES ITS VICTIMS – JACQUELINE TOBONI, DAVID JULIAN HIRSH AND LOUISE LOMBARD GUEST STAR – Nick (David Giuntoli) and Hank (Russell Hornsby) are called to an unusual crime scene with a victim who appears to have died from clay-induced asphyxiation. At the precinct, Wu (Reggie Lee) begins to grow more suspicious of Trubel’s (guest star Jacqueline Toboni ) presence. At the Spice Shop, Elizabeth (guest star Louise Lombard) makes a major breakthrough with regards to restoring Nick’s powers, while Monroe (Silas Weir Mitchell) and Rosalee (Bree Turner) experience cultural backlash as a result of their inter-Wesen marriage. In Europe, Adalind (Claire Coffee) hopes that putting trust in her mysterious visitor will help her escape the dungeon.”

Don’t forget to come back here tonight at 9 PM EST for our recap. In the meantime, hit up the comments section below and let us know what you’re most looking forward to in tonight’s season 4 episode 4.

Getting Nick his powers back is literally the only thing Rosalee and Monroe can think about at the moment. It seems their friend had unknowingly offered them protection by just being a Grimm. And without him –the Wesen community has shown the couple how they really feel about interracial marriages.

A small example of what Rosalee and her new husband are now facing is the brick that was thrown through the Spice Shop window. So even though Elizabeth, Renard’s mother, kind of scares them – the couple are willing to do whatever she says. As long as she can help anyways.

But as for Nick, he for once was actually enjoying being normal. He and Juliette were rebuilding their lives and enjoying a nice quiet dinner. Something they haven’t been allowed to do in what felt like years. Hence, for small time, he thought that maybe only having one Grimm wouldn’t be so bad. However he was forced into changing his mind when Trubel appeared to need him. And more specifically his Grimm like help.

Trubel hasn’t been coming back to the house as often as she used so finally nick had had enough. He sought her at the trailer and confronted her. He asked why she’s been hiding from him and Juliette and she told him she didn’t want to put him at risk. She confessed the federal agent that’s been hounding him is Wesen and that the woman had an offer she sort of threatened Trubel to agree to.

Nick promised he would take care of her but how can he when he’s just an every day human?

As things go, Trubel has been helping Nick out more than he could currently help her. And she’s still doing that in spite of the danger she’s now facing.

A suspicious murder had gone done in the city and the guys instantly knew they couldn’t handle the case on their own. They needed Trubel

And she came through for them. Thanks to her she was able to identify the crime as Wesen related. The victim himself was a Wesen but he had a bad habit of beating up his wife and stepson. So someone else, namely his brother-in-law, called on the powers that be to remove him from the picture.

The brother-in-law later confessed to the crime but no one could understand how he was able to kill a serial abuser by entrapping him in a mound of clay. So first thing first, the brother-in-law had to explain how he committed the murder. Apparently there’s a piece of scripture hidden in the Torrah that talked about a Gollum creature. And the brother-in-law who just happens to be deeply religious also had an artifact that was passed on by his mentor.

So by using both a scroll and the artifact, the brother-in-law accidentally released a Gollum into the world. Though he doesn’t know how to control it.
And while Nick and Hank believed his version of events – they couldn’t bring the man to justice. A stoy about a Gollum wasn’t going to hold up in court.

But letting him free wasn’t going to help either him or his family because the brother of the victim, Nate, knew his former sister-in-law was behind his brother’s death.

Unfortunately, Nate wants justice and the little boy that had survived his stepfather personal brand of terror didn’t look like he was going to make it pass his former uncle!

Although, and what no one saw coming, something tends to happen when little David gets scared. His uncle had summoned the Gollum to protect his nephew and that means the Gollum is going to keep on appearing as long David needs it. Hence if there’s an uncle showing him “his true face” – the Gollum will seek revenge.

They terrified the little boy to ensure the Gollum came back but no one knew how to stop once it began attacking all of them.

Surprisingly, David was the one that made it go away. Once he started to fight it – the Gollum saw itself as the enemy. It seems all David needed to do was learn to fight his own battle and show the Gollum that he wasn’t needed.