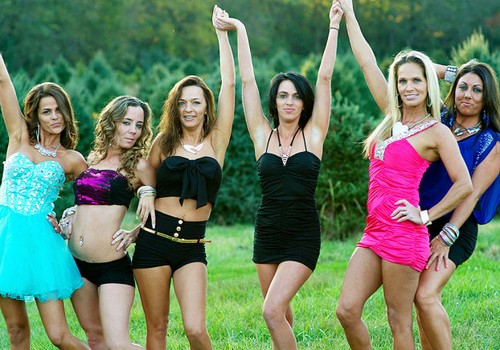 Tonight on TLC GYPSY SISTERS continues with a brand new episode.  On tonight’s show called, “The Family That Plays Together, Stays Together” in the season 2 finale Kayla plans a luau to mark the end of summer and Mellie plans a baptism for her baby.  Did you watch last week’s episode?  We did and we have a full and detailed recap, right here.

On last week’s show after viewing Nettie’s apology video, Kayla agreed to meet with her. They decide a road trip was just the thing to unite the family. Along the way, a visit to an animal park proved this group is wilder than the park’s inhabitants!

On tonight’s show as the summer comes to an end; Robbie makes a surprise appearance in Tennessee. JoAnn and Sheena plan a trip to a winery to keep the fun going. Nettie reveals a secret; Kayla organizes a luau bash for the clan; and Mellie plans a baptism for baby Richard.

Tonight’s episode is going to be another drama packed one, which you won’t want to miss. So be sure to tune in for our live coverage of TLC′s Gypsy Sisters Season 2 Episode 9 at 9PM EST! While you wait for our recap, hit the comments and let us know how excited you are about the new episode of Gypsy Sisters tonight.

Tonight’ season finale of TLC’s Gypsy Sisters picks up where we left off last week, and the girls are still on a road-trip in Tennessee. Everyone is headed to bed, Nettie takes Mellie aside and tells her that she is going to call Robbie (Baby Richard’s father) in the morning so that he can meet his son. Mellie agrees.

In the morning Robbie arrives at their cabin. JoAnn lets him in and is surprised that he actually came. Robbie makes a beeline for the baby, but Mellie won’t give him up. Robbie follows her up to her room, and Mellie reluctantly lets Robbie hold him. Mellie tells Robbie he can see the baby whenever he wants, but she isn’t worried about trying to get along with him, because she knows he isn’t going to stick around. Mellie gives Robbie a tutorial in changing diapers and what Richard is allowed to eat (formula, duh).

Nettie, and her sisters, and their kids head to Gatlinburg, Tennessee. Nettie and Kayla have a surprised planned for the group. They have scheduled “Zorb Rides.” You strap yourself inside a huge rubber ball, a roll down a huge hill inside of it. Kayla, Sheena, Nettie, and Mellie all take a turn, and it turns out not to be as fun as they thought it was going to be. Actually, it made them pretty sick.

Nettie and her family head back to West Virginia, and they have a “Kids’ Day” at Nettie’s house. JoAnn and Scheena leave all of their kids at Nettie’s house with all of her kids, and head to a toy store to buy some toys to keep the kids busy. Scheena and JoAnn decide that they want to plan a girls’ night with Nettie and Kayla. They decide to go to a wine-tasting.

At Kayla’s house she is eating a snack with her sister Annie. Annie confesses to her that she wants to call her ex Josh, and see if he wants to come back home. They have been separated all summer. Kayla thinks it is a good idea, and sends her outside to call him. Josh agrees to take some time off of work and come back to town to talk to Annie about their relationship.

Sheena and JoAnn head back to Nettie’s and invite her to the wine-tasting. Nettie is thrilled, she is looking forward to being a “tipsy gypsy.” They are trying to decide if they are going to invite Mellie, they’re scared she is going to get drunk and crazy like she used to before she got pregnant.

JoAnn and Mellie head to a pottery shop to get Baby Richard’s footprints painted on a keepsake. While they are painting Mellie dishes on her relationship with Robbie, she says she doesn’t want anything to do with him. If he wants to see the baby he can, but he isn’t allowed to take him anywhere.

Kayla is out on a date-night with her husband Richard. She tells him that she is going to a wine-tasting with Sheena, JoAnn, Mellie, and Nettie. Richard is less than thrilled about the idea. He is afraid that Mellie and Nettie are going to get crazy and out of control.

The girls rent a party bus, complete with strobe lights and a stocked bar to take to the winery. They stop at a store and buy Mellie some hard lemonade because she is throwing a temper tantrum. They arrive at the wine-tour, and Mellie is out of control. The own of the winery is trying to show them how wine is made and give them a tour of the winery, but Mellie is out of control. Nettie is embarrassed of her sister.

After the wine-tasting Nettie, Scheena, Mellie, Kayla, and JoAnn head outside for a little picnic. Nettie decides to tell her friends that she has been diagnosed with Lupus. While Nettie is trying to share the news of her disease with her family, drunk Mellie is screaming and crying and telling Nettie to shut-up.

The next day the girls decide to throw a luau for Gus and Laura (Kayla and Annie’s brother), because he is returning to town. While JoAnn is buying supplies for the party she receives a phone call from Scheena. Scheena isn’t coming to the luau because she has “skipped town” to meet up with Henry. JoAnn’s not happy she is trying to get back together with her ex. He’s not a good guy.

Nettie takes Mellie with her to the spa. She is trying to teach her how to be more lady-like, and begin acting like a “young woman.” They are also planning for Baby Richard’s christening. Mellie thinks that Nettie took her to the spa just because she wants to be the baby’s godmother.

Annie, Laura, and Kayla are cooking food for the luau. Annie is trying not get any food on her clothes because her husband Josh is on his way and she wants to “look pretty for him.”

Josh finally arrives, and Annie rushes out to meet him. Annie tells him that she loves him and misses him, and she wants to work things out between them. Josh agrees with her, and they decide Annie will head back home with him.

Nettie, JoAnn, and Mellie are “blinging out” Little Richard’s christening outfit. They are still arguing over who will be the baby’s God Mother. Mellie decides to call Dallas, and ask her to be the baby’s God Mother. JoAnn is upset, she takes care of Little Richard more than Mellie does. Mellie storms out of the house to go to a concert and leaves her sister to care for her baby.

The next day they are trying to get ready for Richard’s Baptism. Mellie and Dallas are a hot mess from the concert they went to. Mellie sprained her arm and Dallas chipped her teeth during their wild night out.

Annie and Kayla arrive at the Baptism, and no one is eve there yet. They are less than happy to see that they baptizing the baby in a crick. Nettie, and Mellie finally arrive with the baby and the baptism can begin. JoAnn pours some of the holy-water on Mellie’s head, and she curses JoAnn out right in front of the minister.

It’s time for Kayla’s luau. Mellie arrives with Dallas and Little Richard, and a bad attitude. She is still upset that JoAnn tried to embarrass her at Little Richard’s Baptism. Everyone is trying to eat and Mellie is being rude to everyone. After they eat, JoAnn and Nettie want to take their picture with Little Richard. Mellie freaks out because she doesn’t want JoAnn to be in the picture with her son, Mellie tries to yank the baby out of Nettie’s arms. JoAnn has had enough, she flips on Mellie and calls her “mother of the year,” and reminds her that she has taken care of Richard more than she has. Everyone is shocked to see JoAnn standing up for herself. Kayla is upset because her luau is being ruined.

After JoAnn and Mellie settle down, the family relaxes and ejoys the “End Of The Summer Party” and reflects back on all of the crazy things they have gone through together this summer.