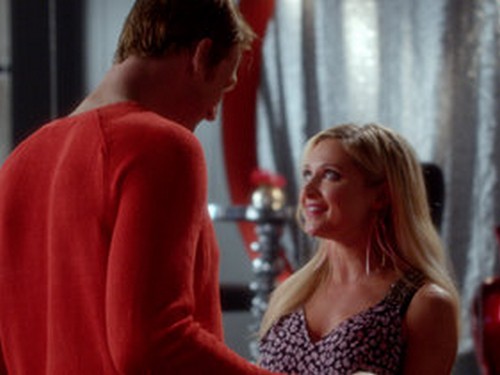 Tonight on VH1 HIT THE FLOOR airs with a brand new episode called, “Behind the Back.” On tonight’s show a stunning development marks Sloane’s investigation. Meanwhile, Jelena gets the upper hand on Ahsha; Terrence makes a huge decision; Jude and Zero team for a scheme; and Lionel’s true motives are exposed.

On the last episode Ahsha and Derek struggle to keep their relationship secret. Meanwhile, Sloane’s investigation into Oscar intensifies, German and Derek square off, Pete and Raquel go public, and Zero sets his sights on Jelena.  Did you watch last week’s episode?  If you missed it we have a full and detailed recap, right here for you.

Tonight is the third episode of Hit the Floor, it’s returning with its usual Hit the Floor drama that you won’t want to miss, be sure to stay tuned for our live coverage of the show tonight at 9PM EST! While you’re waiting for our recap hit the comments and tell us what you think about the second season of Hit the Floor so far.

Everyone wants something and they’re willing to use whoever they have to in order to get it!

Chase called on Sloane as a last minute resort to get the truth out there. She was apprehensive at first but deep down even she knew Chase wasn’t capable of admitting to moving Olivia’s body only to then swear he didn’t kill his wife. It’s farfetched enough to be the truth.

Chase believes Oscar killed his wife and, because he wanted to use as much ammunition as he could to take the other man down, he bent his principles and moved Olivia’s body. Yet, Sloane pointed out that he’s budding up to Oscar for months. And, well, Chase claimed that to be all a part of his ruse. To help Sloane see what Oscar is capable of he told her that he suspects Oscar was behind Mia’s death.

Mia is a trigger for Sloane and she’s hoping Chase didn’t pull on it to escape his sentence. Chase was offered a plea bargain of 20 years and up to their talk – Sloane along with others was counting on him taking it.

Oscar, for one, was disappointed to hear otherwise. His henchman had to be the one to report back to him and it’s a sure bet the boss wasn’t happy with that particular progress report. So Oscar took on Chase personally.

He called Chase in prison and threatened to get him from behind bars. As for Jude, he caused the usual behind the scenes trouble with Derek and Terrence. And he used Zero to do the grunt work for him. Zero approached Terrence and told him in person that he was dating Jelena and that if the other man had a problem with it then whatever he had with the cheerleader wasn’t worth causing friction for the team. But Terrence didn’t mind.
He’s done with Jelena. So done he’s selling the restaurant he named after her.

And Jelena was hurt to hear that. She’s been running around scheming and all along she never realized how far Terrence was willing to go to erase her from his life. But, hey, at least she got somewhere with her plans even if they were small and petty.

Jelena found out about Ahsha and Derek and because she knows them having a relationship would get Ahsha fired – she set about pushing them into doing something reckless. She made Derek stay behind one of their games and he caught Ahsha and German on the kiss cam. It made Derek jealous and forced Ahsha into reassuring him. So she agreed to go to on a date out in public. Sadly for them, they were being followed and cameras caught them making out.

TMZ later called asking for a quote to go along with their footage.

The way Jelena handled them was cold. Her new boyfriend may be just as ruthless, but he as nervous about her as everyone else. He calls her precision in doing things near sociopathic. Though that doesn’t mean he’s going anywhere. Zero cares and just to show it he admitted to nearly buying her namesake restaurant. And he could have done it too if the owner hadn’t pulled it off the market.

So Zero isn’t the only one unable to shake Jelena!

Meanwhile, Kyle might have developed some weird kind of friendship with Freddie. You know, the guy withholding her divorce until he gets his money. When she got Pavle to dump the lying Lexi, the poor sweet foreigner took back his ring and gave it to Kyle as thank you present. She, in turn, wanted to give it to Freddie in order to put a dent in the money she owes him but he claimed the pawnbrokers were too much trouble.

Is that the truth or did he not want this thing with Kyle to end so soon?

Anyways, the real killer was revealed tonight and you’ll never guess who it is. Chase thought it was Oscar and Oscar truly thought it was Chase. They realized their mistake though during an impromptu prison visit.

Jelena was the one who killed Olivia. Because, really, how else do you explain her shredding a note from the deceased stationary saying “no more secrets!”