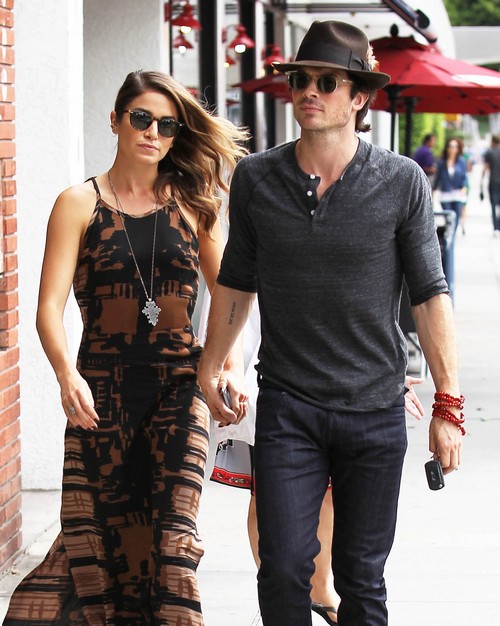 Vampire Diaries fans still haven’t gotten the memo that Ian Somerhalder has moved on from Nina Dobrev, and they’ve been taking out their anger and frustration on Nikki Reed, Ian’s new girlfriend. However, Ian’s not going to stand for anybody dissing his new lady, and took to Instagram in a vehement rant defending Nikki against these fans.

Ian reportedly wrote, “You HATE NIKKI REED? Really? Do you know her? Hmmmm, I’m not sure that you do. Look on her Instagram feed or twitter and all you will see is a compassionate and beautiful human being. Please put your negative energy elsewhere. You don’t even know the person you’re talking about.”

The rant continues in that vein, with Ian telling fans that Nikki was a ‘beautiful person’ and that if they hated her, then they must hate him as well.

I’m sure Ian meant everything he said, and this is really the first time he’s spoken about Nikki in length to the public. Sure, he and Nikki have engaged in plenty of PDA over the weeks that they’ve been dating, but Ian’s quick defense of Nikki and his effusive praise says a lot about his feelings. Unfortunately, he doesn’t seem to realize that most of his fans [at least, from the TV show] just want to see him back together with Nina, even if that’s not bound to happen. If anything, Nina and Ian have grown even further apart since Ian started dating Nikki, understandably. This is what has so many of the fans riled up, and unfortunately, Nikki’s just the target of their vitriol.

I shudder to think what will happen if Ian and Nikki do get engaged, as wedding rumors have been hitting the web lately.

What do you guys think? Do you like Nikki? Do you think Ian was right in telling fans to back off? Let us know your thoughts in the comments below.