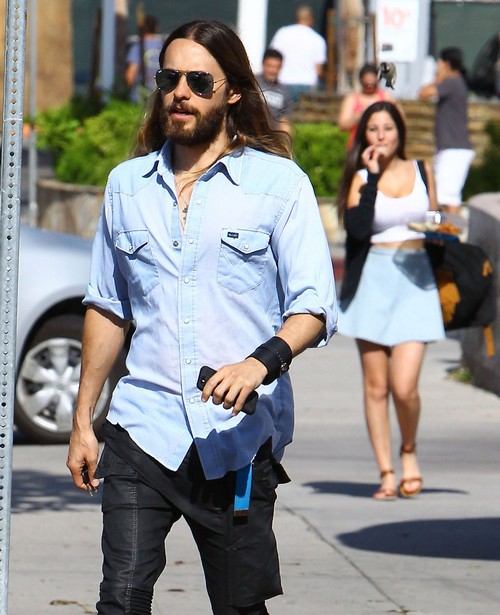 We already know that Jared Leto doesn’t exactly have the best track record when it comes to fidelity, right? In fact I can’t really say that I’m sure that Leto ever approaches his relationships as if they are exclusive and the conveyor belt of hot chicks that he has on his arm seems to keep moving pretty quickly, doesn’t it? According to the May 26th print edition of Star magazine Leto has been dating younger model, Dimphy Janse for a hot minute, at least long enough for them to be connected on paper without him denying that they are dating.

Leto also was spotted out in Studio City yesterday with a hot little brunette. The two appeared to be grabbing lunch and were very cozy- until Leto spotted that paps. Then he got himself out of there, leaving his gal pal holding lunch as he jumped in his car and left her! The photos kind of tell the story of a guy trying to outrun photographers (Fail!) as his date looks on in confusion. This poor chick looks like she is in a state of disbelief. My guess is that not too many guys have cut and run like this on her and it must have stung a bit.

Unfortunately if Leto was still seeing Janse then I’m pretty sure he’s going to have some explaining to do this morning when she sees the photo set of him with yesterday’s chick. Isn’t Leto getting a bit old for this? I mean he’s pushing 40 right? At some point shouldn’t the game change into a more grown up version? Tell us your thoughts on Leto’s getting busted in the comments below!

Jared Leto who is rumored to be in a relationship with model Dimphy Janse gets caught with a mystery girl in Studio City, California on May 17, 2014. Jared and the mystery girl in the blue skirt behind him were spotted out together. As soon as Jared spotted the camera he immediately took off leaving the girl behind. The girl did not look to happy that Jared had just left her.