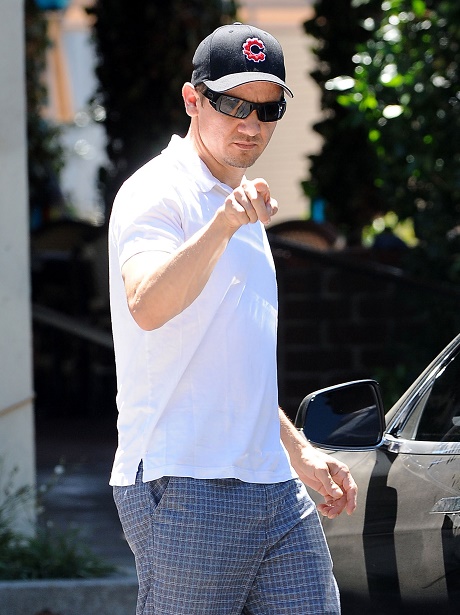 Jeremy Renner is married, you guys! I was wondering if he and his baby mama, Sonni Pacheco, had gotten serious  – especially considering Jeremy’s notable absence on the party scene over the last year. Keep in mind, this is the same dude who used to frequent every major party in the industry, and in fact, he even had the distinction of being the life of the party.

However, Sonni gave birth to their daughter, Ava Berlin Renner, last year – and since then, we’ve only seen Jeremy on family outings with Sonni and Ava. In fact, Lainey Gossip actually pointed out a while back that Sonni was living with Jeremy, although she didn’t know whether their relationship was ‘official’ or something casual. Heck, Jeremy could have been putting her up considering that she just gave birth to his daughter. But no, it looks like he and Sonni were in a serious relationship after all, AND they got secretly married! D’awwwww.

Apparently, it was all the media speculation that convinced him to finally tell the truth. He explained to Capitol File, “I have tried to protect my family’s privacy, my wife’s privacy. I don’t need her to get hammered with my life. I’ve been talked about a whole lot, because the less I put out there, the less people know, and it makes it interesting, I assume.”

Yeah, the media will always be more vociferous about finding something out if the star is determined to hide it – it’s just the nature of celebrity culture nowadays. Most fans feel entitled to a star’s private life, and it’s considered the price of celebrity in today’s fame-obsessed Internet landscape. Fortunately for Jeremy, interest ought to die down now that people know the truth about his marital status.