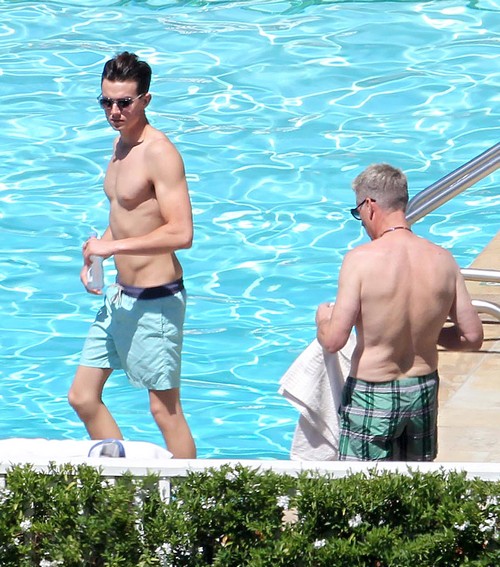 There was no way that Joe Simpson would miss Jessica Simpson‘s wedding, but I don’t think anyone quite expected him to bring along his 21-year-old boyfriend to the ceremony.

In case you don’t remember, Joe and his ex-wife Tina Simpson divorced in 2012 because Joe was supposedly having affairs with barely-legal boys. Obviously, Tina is not Kelly Preston and refused to stand by idly while her husband cheated on her with a bunch of young men. Joe denied the rumors, but unfortunately for him, pictures speak a thousand words.

Since his divorce, he’s been photographed in the company of some questionably legal boys, and he was reported to be dating a 21-year-old recently. Joe was also photographed with this boy the day before Jessica’s wedding, with Fame/Flynet providing the photos’ description as, “Joe walked around wearing his swim shorts with sneakers and was accompanied by a much younger mystery man. The pair kept a safe distance away from each other the whole time but were seen chatting at one point while Joe laid out and worked on his tan.”

Is it me, or is the description very carefully laid out? If Joe and this guy were keeping a ‘safe distance’ from each other, does that mean that they’re just acquaintances, or that they were just trying not to give the press any more ammunition? The wording of the description makes me think it’s the latter, especially since Joe has a history of dating young boys already.

Radar Online claims that the boy’s name is Jonathan Keith, and that he reportedly accompanied Papa Simpson to Jessica’s wedding. Um, inappropriate much? Nobody wants to see their father bring their new boy toy to their wedding, much less when their mom is also at the ceremony. Another source did add that Tina Simpson was ‘hurt’ by Jonathan’s presence, and I doubt Jessica was all that happy with it either. I mean, seeing an ex-husband or ex-wife sucks no matter what, but seeing them happily frolic around with their much-younger paramour probably feels ten times worse.