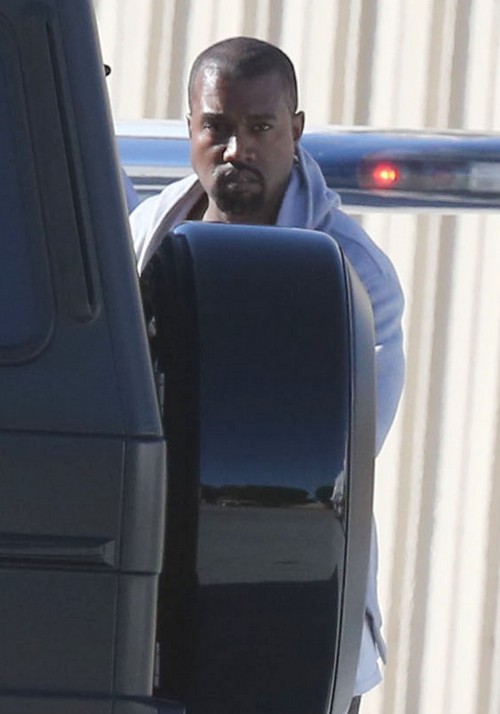 Kanye West was spotted crashing a New Orleans Bachelorette party at the French-Creole eatery Galatoire’s on Saturday night. Kanye, who was dining with several big-shot techies, decided to send over a bottle of champagne to this [very random] bachelorette party group. Of course, several people have already jumped to the conclusion that Kanye is cheating on Kim Kardashian, which would be even more scandalous since Kim’s rumored to be pregnant right now. However, I’m sure a big part of his gesture had to do with Kanye West showing off in front of his friends, even if his intents were more lascivious in nature.

Apparently, Kanye was also ‘fascinated’ by the temporary metallic tattoos that the women had on their arms, and even took pictures of them. Um, creepy much? I can’t really comprehend going up to a random group of strangers – whether they were in a Bachelorette party or not – and then ask to take photos of their arms. I mean, it’s Kanye West so of course they obliged, but doesn’t it strike someone as a very un-Kanye thing to do? Usually, he’s the one going berserk for no reason, especially with his fans and the random people he encounters at restaurants and in public. But even if he intended to get anybody’s number from this group, Kanye still went about his business in a very surprisingly professional manner – or at least, as professional as sending champagne to a bachelorette party and then flirting with them can be.

I know some people will refuse to believe that Kanye would ever cheat on Kim, especially since she’s pregnant with their second child. And to that, I point out Kanye West’s history of cheating rumors, not to mention the amount of time that Kanye and Kim constantly spend apart.