Kris Jenner Calls Kim Kardashian ‘A Piece Of S***’ And An Awful Person – Momager’s On The Warpath! (VIDEO) 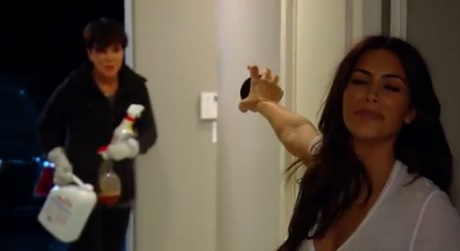 Wow, what sparked such rage in Kris Jenner that caused her to completely GO OFF on her glorious, money-making daughter, Kim Kardashian? In a clip from Keeping up with the Kardashians, Kris finds a room full of dog poop, which has her really angry. She lashes out at Kim, calling her a “piece of s***” and an “awful person” and asks her why she’d let this happen. Like with most things in her life, Kim attaches the blame to somebody else and retreats into her bedroom.

But Kris’s epic hate-fest doesn’t end there. Kris, examining the laundry room, continues ragging on Kim. Interesting. And we thought she was the favorite one!

When Kim says that she’ll help clean up the awful mess, Kris flies off the handle again, this time saying (with an incredible amount of sarcasm), “Yeah, you’ll help. You’re a pain in the ass. You don’t even know how to help.”

Whoah, mama, whoah! I understand that this dog mess is the cause of this outburst, but it sort of sounds like there are some bigger issues at play here. Am I wrong in thinking this? Kris Jenner is the mastermind behind the Kardashian Empire, but we all know who’s the biggest name in the family — and the one who rakes in the most attention: Kim Kardashian. Maybe Kris is starting to feel like she’s doing all the hard work while Kim just sits pretty, doesn’t lift a finger, and basks in the glory of fame — the fame she helps orchestrate and acquire!

Is Kris feeling jealous? Or is she just (simply) pissed off because she’s got dog crap all over her house? What a smelly situation! Watch the clip below and let us know if you think Kris was justified in her angry outburst.