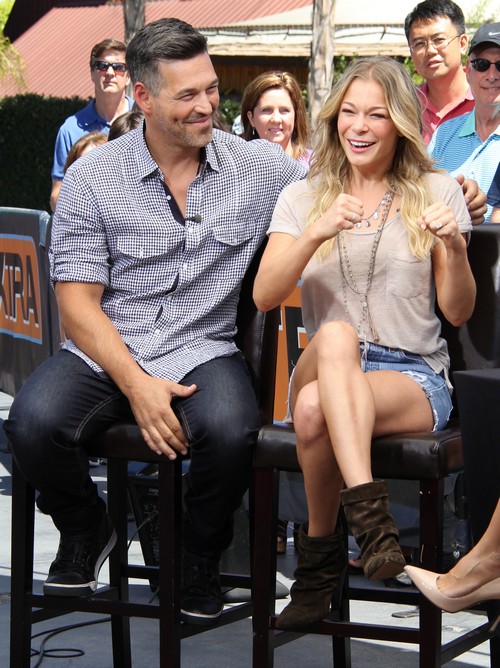 LeAnn Rimes continues to insist that her marriage to Eddie Cibrian has never been better, but we might have just gotten a piece of information that contradicts that. LeAnn claims that she and Eddie have had to deal with a lot of ‘scrutiny’, i.e. the result of her constant calls to the paparazzi. How do you think they always manage to end up getting pictures of her at the supermarket, of all places?

Anyway, she recently let slip in an exclusive interview with Star Magazine that she and Eddie actually went to therapy together to deal with the ‘scrutiny’. So much for pretending their marriage is perfect, right?

She explained, “We’ve gone to therapy to learn how to communicate better because we don’t want to screw with the kids. It has made us better and made our marriage stronger.” There they go, using their kids as an excuse again. Seriously guys, enough with the BS. Just admit that you’ve had issues like every other married couple, and you went to therapy [or pretended to go to therapy] to work through it. We won’t begrudge you the extra soundbite, especially not when you constantly give so many gems on a daily basis.

LeAnn’s show has been doing abysmally since it premiered on VH1, and I’m guessing there’s not long left for its shelf life on television. However, that means that LeAnn and Eddie will be pulling out all the stops now, and that’ll probably include any number of fame-whorey interviews that hint at trouble with their marriage. Considering that people are still fascinated with the LeAnn – Eddie – Brandi Glanville love triangle, it’s probably a good call on their part. Still, it won’t do much good in the end. LeAnn and Eddie is getting cancelled, whether they like it or not. But perhaps they’re gunning for Couple’s Therapy next?