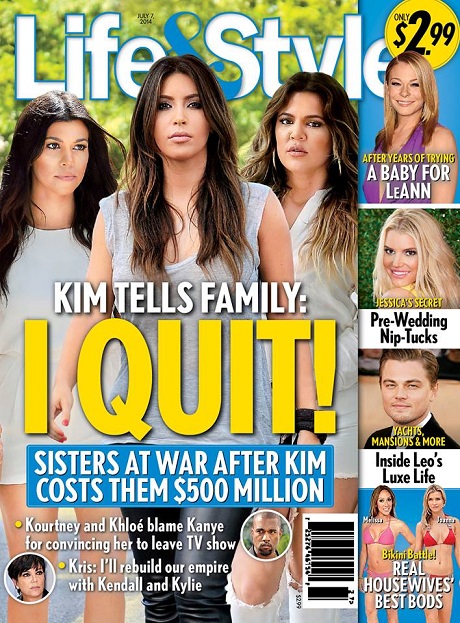 Can you envision LeAnn Rimes as a mother? Well, after years of playing step-mom to Eddie Cibrian‘s two sons with Brandi Glanville, it looks like Rimes is about to dive into motherhood. Supposedly, she has been trying for a few years to conceive and, at one point, she even gained weight in order to make her body function properly so that a baby was a possibility.

According to the July 7th print edition of Life & Style Magazine, Rimes is finally pregnant and couldn’t be happier. She has supposedly wanted to have a daughter for a while now because she thinks that if she gives Eddie the one thing that no one else has then it’ll make him stay loyal. Perhaps she should have a serious chat with Brandi about how well that theory works!

Has Kim Kardashian quit the family business? Sources close to the reality star say that she is no longer interested in doing the family’s reality show (or new husband Kanye West has forbidden it) and momager Kris Jenner is fuming because it could cost the family business millions. According to Life & Style, Kris has turned all of her attention towards her youngest daughters, Kylie and Kendall Jenner. She’s hoping that they can rake in the cash that Kim would have.

Everyone has been talking about the massive amount of weight that Jessica Simpson has lost but now we’re hearing that it’s not just tough workouts in the gym that have helped her bounce back. Perhaps she has had a bit of nipping and tucking as well to help her fit into her clothes. Do you guys believe that Jess’s body is simply the result of diet and exercise?