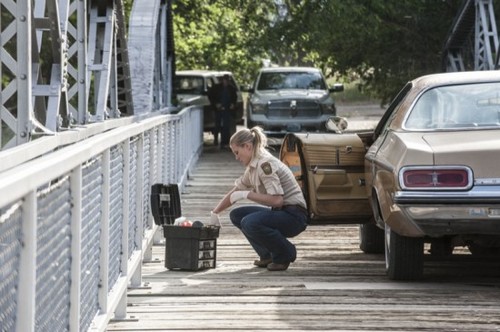 For those of you picking up on Longmire now, in season three of “Longmire,” Walt finds himself reeling from a series of devastating traumas. His best friend, Henry Standing Bear (Phillips), is going to prison on murder charges. Deputy Branch Connally (Chase) has been shot by a mysterious “white warrior,” and Vic Moretti (Sackhoff) is unsure if she has shaken a stalker from her past. Walt is forced to shoulder all of these burdens and try to find a way to set the world right again, but one person knows he can’t do this alone – his daughter, Cady (Freeman). She will fight in court to try and clear Henry’s name while Walt continues to unravel the dark, mysterious secrets of Absaroka County. The deeper Walt digs into all these mysteries, the closer he’ll get to uncovering the real bloody hand behind his wife’s murder.

On the last episode the investigation into a farmer’s apparent murder was complicated by his life insurance policy. Branch and Cady went to Denver to look for a lead that might have helped Henry’s case. Sean gives Vic and ultimatum. Did you watch the last episode? If you missed it we have a full and detailed recap, right here for you.

Tonight’s episode begins with Walt and Vic questioning Travis about Branch’s whereabouts since they have been calling his cell phone for the last two days with no response. Walt brings up the fact that he knows Travis was with Branch when they kidnapped a man. Travis says that he needs protection from Branch because he is dangerous now. He tells them that Branch threatened him about changing his story to Vic about the kidnapping. He says Branch took off after his threat and he hasn’t seen him since. He leaves Walt and Vic with some chilling words, saying that there is no telling what he might do.

Branch is on the road and gets a call from David again telling him to stop chasing ghosts. He tells him he took his peace and says he owns Branch’s soul. He tells Branch that the next time he sees him, he will take his life. Branch has a gun and continues to attempt to shoot David, even after he jumps off a bridge into the water. David claims victory, cheering after not being shot despite all the shots branch took.

Walt and Vic speak with the man Branch and Travis had kidnapped. Walt brings up David Ridges and asks if the man knows why Branch would want to kidnap him. He says he does not and wonders why walt is protecting his deputy, who broke the law. Walt assures him that Branch will have to face the consequences for what he’s done, but they are interested to know why Branch may have wanted him. The man begins to burn sage in the office, as part of a cleansing ritual that he says Walt and Vic will need to have around because Branch has been hollowed out, he doesn’t seem to have a soul any longer. The man leaves after the warning, and Ferg finally goes off about the fact that no one is telling him what is going on with Branch. He reminds Walt how he has stepped it up since Branch has been gone, but it is obvious Walt does not feel this is the right time.

Meanwhile, Cady assures Henry she is trying to get a continuance after learning the court date may be moved up, not giving them enough time to properly prepare to battle his case. She assures Henry she will be back but must go to the courthouse to see what is going on. Back at the station, Ruby gives Walt a file that she was asked to pass on to him. Sean has given Walt divorce papers to serve on Vic. Just as he is scratching his head on why Sean would want him to serve the papers, Branch comes in screaming for Walt. He is trying to relay what happened at the bridge but is barely making any sense as he is so overly agitated and near crazed about the incident. Walt is trying to make sense of it, when Vic makes a comment about Branch’s mental state after defending herself in a conversation and Branch goes nuts. He grabs Vic by the neck and pushes her into the window. Walt and Ferg take action and pull him off and lock him in a cell.

Branch, while in his cell, tries to tell Vic that there are no hard feelings. He tries to talk her into going to the bridge since he cannot. She tells Branch she refuses to go because she knows that once she gets there, the evidence of David ever being there will be gone, as usual. Branch assures her David’s car will be there because he took the keys away when he left. Ferg offers to go, but Vic finally relents. Walt seems to begin to believe that maybe David is still alive. Branch’s father arrives at the station to get Branch out of the cell. Ferg says he cannot release him until he gets the go ahead from Walt. He threatens Ferg and gets really aggressive, demanding he let Branch out. When Walt returns he finds out Ferg let him out. Ferg stands up to Walt about his decision to let Branch out. After he sees hiw his actions are affecting Walt, Ferg is honest and tells Walt about the threats that Branch’s father made. Cady, meanwhile, doesn’t get any allowance on the new trial date.

Walt and Vic are on the bridge and Vic is attempting to get fingerprints on the steering wheel of the car. Vic discovers David’s phone and sees that he called Branch, and one other person. Branch’s father assures him he will protect him whether David is after him or he is imagining it. He has Branch at his home and tells him they will work through this together.

Malachi continues to find ways to bother Henry at the bar. Walt and Vic show up at a gathering and arrest Jacob for his part in aiding and abetting, and conspiracy in the attempted murder of Branch. When Jacob denies involvement and reminds Walt that David is no longer alive, Walt counters that he has seen the phone log and the seventeen calls they had over the past two weeks.

At the station, Jacob is a little more open to sharing now that he is behind bars. Walt asks him why he was protecting David and lying about his death. Jacob said he did it as a favor for David when he asked. Jacob claims he didn’t know the details of what David had done, only that he felt he made some bad choices. Jacob wanted to help him. Jacob walks through the entire plot, along with his involvement, in the supposed suicide of David. Jacob said David promised he would leave immediately after they pulled this off. Jacob says that David believes he is a time-traveling spirit who no longer listens to his advice. David shared with Jacob that he planned to kill Branch. Jacob shares that he advised him against it, but he would no longer listen. When Jacob thinks he’s shared enough to spring his release, Walt tells him otherwise and tells him to find out where David is the next time he calls.

Walt tells Vic that he is acting as a person of the court when he serves her with the divorce papers from Sean. Walt finally opens up and tells her that he actually wanted to say more the other day when she gave her notice. He tells her there is more he wanted to say…and that he wants her to stay. He says he didn’t feel it was his place before, but now, given the circumstances, he feels he can come clean. She asks for a pen as she is ready to sign the papers to get this process moving.

Henry is throwing gas all over the bar as Malachi rolls up wondering why Henry called him over. Henry tells him he wants to know where Darius was when Walt’s wife was killed. He tells him if he gives him this information, Henry will sign the deed to the bar over to him. If not, he will set it on fire. He obviously means business as the bar begins to go up in flames. The firefighters got there in time, however, to save it, but Henry is devastated to have had to hand over the deed to Malachi, only to have found out that Darius was in Connecticut at the time of Walt’s wife’s murder. He shares this with Walt and confirms that Malachi is not lying as Cady has confirmed the alibi.

Branch’s father comes out of his room to look for Branch, only to find he escaped out through a window…which is right next to his father’s collection of guns. Meanwhile, Walt gets a call from Jacob, letting him know that he received a call from David and knows where he is at. We then see Branch walking with a shotgun as he hunts down Travis and threatens him for turning his back on him and telling Walt about the kidnapping. Branch tells him he will let him live, but wants his car. He takes off and Travis reports the incident but cannot tell Ferg where Branch went. Ferg shares the update with Walt and they make a plan over the radios…but Branch is listening in on everything!

Branch is speeding down the road just as Walt zeroes in on David’s location. Branch’s car dies on the side of the road and he is livid. Walt sneaks in behind who he thinks is David, only to have a woman turn around. He is told by another woman that David is not there. Just then, Walt hears someone taking off in his car. He gives chase, but his car is too far away. Just then, Walt is hunted down and shot at by the white warrior Branch had always talked about. He is on horse and trying to kill Walt. Walt ends up stabbing him when he leaps onto Walt. The white powder from his body can be seen all over Walt’s body as he slowly gets up.

Next week is the season finale so be sure to meet us here next week…same time!