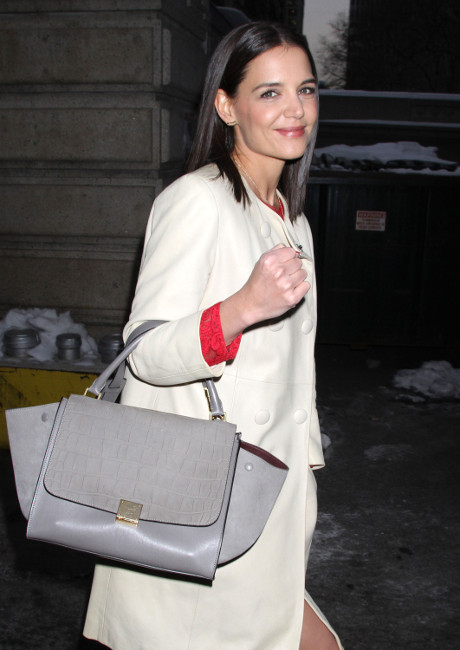 Fashionistas around the world unite! It’s now time to talk about Mercedes-Benz Fashion Week 2014! This is the time of year when the fashion forward come together in New York to experience the most amazing fashion shows and the upcoming trends that’ll have our mouths dropping for days — or years — to come. This year, the most fab week ever — featuring some of the world’s best runways — began on February 6 and concludes today, February 13th. Here are some highlights from the amazing events:

Front row at the DKNY 30th Anniversary Fashion Show were Rita Ora and Katie Holmes, both in stunning black dresses and sleek, sexy hair. Chrissy Teigen was nearby as well.

BCBG highlights asymmetrical pieces, followed by Richard Chai Love and Nicholas K. Nicholas K went for more of a punk, edgy look with sexy crop tops. Richard Chai Love played it safe with more of a conservative, crisp look, while BCBG hit the mark with a very versatile look…sexy, classy, with a little edge will leave lots of men with broken necks. I think they were most daring with their fall color choices, introducing some great new color combinations that will add some depth to your closet.

The Red Dress show was a great way to kick off the first day of Fashion Week. The show, meant to raise awareness for heart disease in women, highlighted celebs including actresses, athletes, and musicians wearing different designer ruby red dresses as they made their way down the catwalk. Lindsey Vonn couldn’t make it to Sochi, but she did make it down the runway, crutches in hand. Ireland Baldwin, Bella Thorne, Anna Sophia Robb, and Joan Jett were just a few of the celebs who participated in this great event, wearing dresses designed by Zac Posen, Pamella Roland, Alice & Olivia, Carolina Herrera, to name a few.

Handkerchief hemlines, relaxed hemlines, draped fabrics, artfully arranged layers, see-through fabrics, leopard prints, bright colors, and oversized outerwear dominated in the Fall 2014 shows so far. Unfortunately, many are going with fur trims on collars and cuffs on the outerwear that seemed to have gotten even bulkier than last year. While it was nice to see some bright colors in the Fall shows, there were quite a few muted tones and neutrals that offered a sleek look.

Herve Leger’s signature looks were accented with fur and velvet.

Anna Kendrick and Emmy Rossum were seated front row together at Caroline Herrera, while Tina Fey and Dita Von Teese caught up backstage at the same show.

Victoria Beckham boasted the best of the best front row at her show…her entire fam! David, Harper, and the boys cheered on their mom.

Bella Thorne was at the Lacoste fashion show wearing what looked like an 80’s workout crop top with a librarian’s pencil skirt. Her shoes clashed with her skin and the dress. At the same show…Jessie Metcalf and his fiancée Cara Santana.

Right on trend in fur trimmed collar and sleeves, Anna Wintour brought daughter Bee Shaffer with her to the Prabal Gurung fashion show.

Joe Jonas is apparently still with Blanda Eggenshwiler, as the two sat front row at the Richard Chai show.

AnnaSophia Robb looked downright silly in a strapless dress, strappy heels, and orange legs and feet. Hello…it is FREEZING in NY right now, and you should really work that fake tanner in a little better.

Want more Fashion Week news? Come back soon for more details, all brought to you by CDL. In the meantime, check out some of the great pics below featuring celebs either coming or going to the biggest fashion events in the industry!