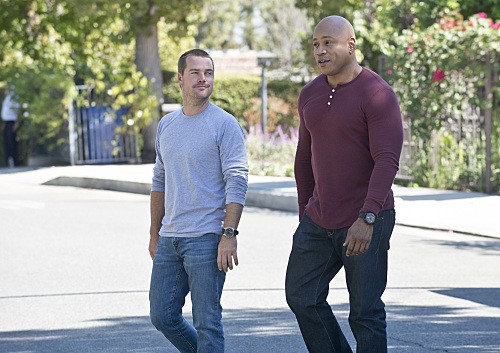 Tonight on CBS NCIS: Los Angeles continues with an all new Monday December 8, season 6 episode 10 called, “Reign Fall,” and we have your weekly recap below.  On tonight’s episode, Sam [LL Cool J] reflects on his relationship with his father when the team investigate the murders of marines who have sons in military academies.

On the last episode, after Granger was poisoned by the mole and Eric was one of the seven suspects, Hetty ordered a lockdown while everyone was investigated. Did you watch the last episode? If you missed it, we have a full and detailed recap right here for you.

On tonight’s episode as per the CBS synopsis, “Sam reflects on his own upbringing and relationship with his father when the team investigates the murders of marines who have sons in military academies.”

A member of the paparazzo was murdered on tonight’s episode of “NCIS: LA”. His name was Jack Chapman and though he’s had several bad run-ins with celebrities – its doubtable any of them are smart enough to recreate IUD just for him.

One of the suspects, Kip Brigham, is actually a friend of Deeks. Kip is a basketball player and Jack had pictured him coming out of an illegal gambling den. But there doesn’t seem to be any hard feelings on Kip’s part. In fact, Kip went on to use his new status as a bad boy to win himself contract that was double than what he was earning before.

Thus the one person that’s had a reason to kill Jack turns out to have no reason at all. Also he had a pretty solid alibi in case the team needed any reassurances.

So there’s a possibility the bomber may not have been targeting Jack. Especially as the bomb itself was set off at someone else’s house. Jack was house-sitting for an old friend of his when he was murdered. And that friend just happened to be military.

Marine Gunnery Sergeant Mike Johnson had Jack watch the house while he was away. He was too busy on a mission to do it himself and technically that house wasn’t even his main home. And yet someone clearly wanted to kill him (using old information most likely) and slowly it’s starting to look like it had something to do with his son.

Nell and Beale had looked into similar cases like their bombing and what they found was several other bombings that involved the murder of military fathers that also have sons in military schools. Typically, fathers like Johnson can be kind of strict. And some would say they tend to push their own children a tad too far.

And that’s what their suspect is probably thinking as well when he targets these men.

The team is working with the theory that the bomber/serial killer leaves behind gifts for the sons. Hence the odd items that can be found next to the victims. And their killer could be seeing himself in these kids because he also had a hard relationship with his own father.

The killer must have seen himself as harshly disciplined and in need of someone saving him. And that why he’s targeting only a certain set.

But the killer has been getting away with these murders for quite some time. So in order to catch him the team knew they would have to use the proper bait. Like Johnson. Johnson managed to escape his fate the first time but the team believed if they dangled him in front of their killer – it would drive their suspect to seek Johnson out again.

And the plan worked. It did push someone to the front but it wasn’t their killer. No, their killer had an accomplice. Sadly, he had a weak younger brother that was easy to manipulate. So he used that brother in an attempt to run over Johnson while he went about planting more bombs.

Though their real killer was David Mills and apparently his stepfather (a military man) was abusive towards him and his family.

The stepfather “disappeared” a few years ago and as for David – he was dishonorably discharged from the military after getting into a fight with his superior officer. At the time, he was known to have problems dealing with authority figures.

And clearly he still has those problems now. So Sam and Callen got David’s mother to give up his location and then they proceeded to threaten their suspect (once they found him) with one of his own bombs in order to find out who was his latest target.

David had been planning on murdering Marine Master Sergeant Shawn Lewis but he hadn’t known the man’s son was going to be the first back at the house. Luckily, Sam got to the boy before he could get hurt but that doesn’t change the fact in the end David nearly killed the very same kid he was deluding himself into believing he was protecting.