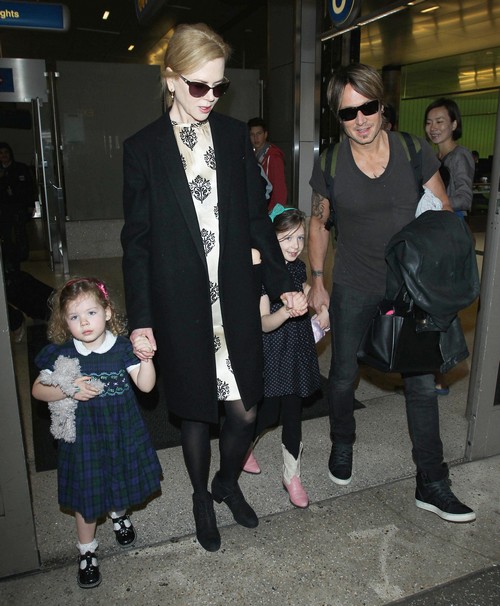 A few months ago Nicole Kidman was worried that her career was dead in the water. She had signed on to play the lead in Grace of Monaco and instead of it being an Oscar-worthy performance the film tanked so badly that producers have blocked distribution in the states. They are hoping that you and I never get a chance to actually see the mess that unravels onscreen. Nicole went through a patch of frustration as she dealt with the fallout while watching her husband, Keith Urban’s career explode in a good way. The couple was basically apart for the last 18 months due to work commitments – divorce, separation and marriage trouble rumors were all over the Internet and Nicole begged Keith for family time.

According to the Aug. 4th print edition of GLOBE Magazine the couple had made an agreement to make family time a priority in their Nashville home in order to save their marriage but apparently it’s Nicole who has nixed the idea. Instead she has signed on for not one but two London stage productions! The shows will play back to back and she intends to move to London with the couples’ two daughters for several months. Needless to say, Keith is beyond pissed. After his wife through a fit about being away he had purposely scaled back his schedule in order to put the family first. Sources say the couple’s marriage has been on shaky ground for awhile and Keith believed family time was necessary in order to save their marriage.

Is there a chance that Keith will agree to move to London for several months with his family? Or is the anger towards Nicole’s decision instead going to be a catalyst that sends him in the opposite direction and back to focusing on his own career? Is there any chance that these two are going to put their marriage at the top of the priority list or is divorce looking more likely than ever? Tell us your thoughts in the comments below!