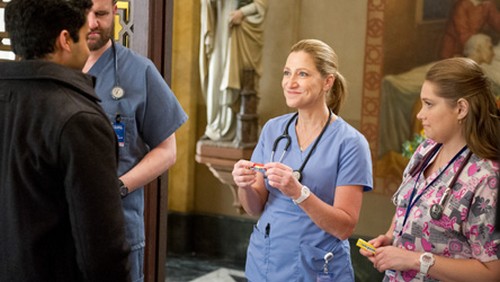 Tonight on Showtime the twisted and darkly funny NURSE JACKIE is back with a new episode called, “Candyman.” On tonight’s episode Jackie learns about a DEA investigation at the hospital that will require her to take a urine test, so she plots to get around it. Meanwhile, Kevin and Mia plan their wedding; the homeless nun returns in worse shape than ever; and Coop and Carrie find a way to skirt their no sex in the hospital rule.

On last week’s episode Jackie detoxed at home – with the help of Frank, Eddie, and Antoinette – and dreams that she was back on the floor at All Saints, where she met a mysterious patient who exposed her greatest fear. When she awakened, the worst of the detox was over: she was on the mend. Frank raised an objection about Grace moving back home, which boomeranged back to slap him in the face.  Did you watch last week’s episode?  If you missed it we have a full and detailed recap, right here for you.

On tonight’s episode Frank warns Jackie about an upcoming DEA investigation at All Saints – and it’s clear the physician’s number she stole is coming home to roost. Antoinette turns to Eddie for help and more, Coop and Carrie find a way to get around their ‘no sex in the hospital’ rule, and the death of the newsstand proprietor has the rest of the staff at All Saints reflecting on the anonymity of life.

The girls, Kevin and Mia are tasting wedding cakes. She tells Fiona to go easy with the frosting. Kevin asks how it’s been with Grace back at home and she says it’s been okay considering the drama at school and that they’re still freezing her out. Mia asks Jackie if she got her wedding invitation – she says they would love for her and Frank to be there. Jackie says she and Frank are in a rough patch and Kevin asks if she’s okay. Mia says they and the girls really want her there. Jackie again tells Fiona to stop eating the sugar.

Jackie walks up on Gloria in an argument with a cop writing her a ticket. Eddie is there and tells her she looks great. She tells him about the wedding invite. Frank calls and warns her that the stolen DEA number is being investigated. He says that they are coming over to drug screen everyone and she says it’s a good thing she’s clean and sober, but is very curt with him.

Thor and Zoey are annoyed that the newsstand is shut down and they can’t get their snacks. Gloria asks Jackie what it’s called when mercury is going backward and says it’s a shit show. Jackie asks for the day off and Gloria says forget it. Plus Helen the runaway drunk nun is back and asking for Jackie. She checks her out and Carrie walks up to see her. She reminds her that she threw up on her last time. Carrie leans in to check her vitals then cringes when Jackie says she has lice. Carrie freaks and orders drug work and a lice check.

Zoey comes up and says the newsstand guy died. Jackie asks – Naeem died – and Zoey is horrified that she didn’t even know his name. Coop checks Carrie’s scalp for lice and tells her that her scalp is very clean. He makes monkey sounds and says he’s grooming her. She kisses him and throws him against a file cabinet. Gloria comes in and Coop says he was checking her for lice and Gloria asks if they were in her mouth.

Zoey makes an announcement that there will be a memorial for Naeem in the chapel. She tells Thor she’s expecting a very heavy turnout. She says he has a large family – Zoey called them. Carrie tells Helen she’s anemic and needs a blood transfusion.

Eddie comes in looking for Gloria because there’s a tow truck outside for her Mustang. Jackie runs off and yells back to Carrie that she has to wash her before the transfusion. Carrie says she doesn’t wash people. Helen acts shy and Carrie turns her back to let her undress but the disgraced nun sneaks out instead. Carrie realizes too late and has to go hunting for her.

Gloria comes outside yelling at the two truck driver. She sticks her head in and bribes the driver with a $100. Jackie helps her parallel park and sticks her foot out intentionally to let Gloria run it over. Later, Gloria takes an x-ray and tells her she feels bad about it. Antoinette comes in and asks Jackie to go to a meeting. She tells Antoinette that she wants to try being sober on her own for awhile. She promises her that she will still go to meetings. Helen rambles by and Jackie has to go chasing her.

She takes her into the shower and washes her down. Helen says not many people have seen her like this and Jackie says they have to get her clean. She asks if she’s comfortable and the nun says – not at all. She warms up the water and then asks her about a bone protrusion in her back. Helen says she tried to jump in front of a cab last week. She tells Jackie that everything is painful.

Jackie limps in to Gloria’s office and tells her she needs a psych consult for the nun. She tells Gloria that she spoke to her sponsor about her pain. She says she can get a pain medication prescription filled that Gloria would hold on to and administer so it’s never in Jackie’s hands.

Thor asks Coop to comes to Naeem’s memorial but he says he didn’t even know the man. Thor says none of them did and adds – it was like he was invisible. A guy comes in and greets Coop by name – he shakes his hand and then introduces the other people with him – Naeem’s family. They hug him and tell him they are happy to meet him. Seems they all heard about Coop.

Antoinette tells Eddie that Jackie is pushing her away and says it’s not good after detox. Eddie says that’s how Jackie operates and says there’s no choice. Antoinette says she can go to her boss and Eddie tells her no. Jackie comes in looking for ibuprofen and is shocked to see her there. She asks why she’s there and Eddie says they’re going out for coffee.

Gloria comes up and asks Helen if she’s still thinking of self harm and Helen says she just wants to do. Zoey comes up and tells Helen that she looks so pretty. Zoey pulls out her fun and snaps a photo and shows it to Helen. She asks if she wants her to send it to her and she says send it to homeless dot nun at AOL dot com.

Gloria takes Jackie outside and tells her she got a pill scrip from Coop and gives Jackie a small dose for her pain. She thanks her and takes them. Zoey greets people and hands out tissues to the well wishers. There’s a cellist there and Thor asks if she hired him. She says she traded a full body scan to the crazy cellist down the street.

A guy comes up and says to Zoey – Juice Fruit – she says what. He says his name is Ajay and says his dad told him about all of them. He hands her Juicy Fruit, sugarless gummis to Thor and a $100,000 bar to Gloria and Life Savers to Jackie. They are all very impressed. A woman speaks and says Naeem loved working at All Saints with all of them.

She asks if anyone would like to say anything but they all sit still. Zoey pokes Jackie and says she was the only one who knew anything. Jackie reluctantly goes down front and says that Naeem was a sweet man and that many of us knew him and some didn’t. She says some of us knew him better than others. She says he was always smiling and part of our day, has such a beautiful loving family. Jackie gets choked up and then says she’s sorry. She cries and can’t stop.

Coop comes up and takes her place. He says he has something to read. He recites the lyrics to The Candy Man (look it up if you’re a youngster – it was Sammy Davis Jr from back in the day). He starts to sing it and then Zoey joins in and then Thor. Then everyone else finally joins in smiling and singing. The cellist plays along. After, Carrie tells Coop that he’s perfect and that he made everyone sing and cry. He tells her that funerals are about life. She says she doesn’t have lice and doesn’t want to sue him. She says she doesn’t want to have sex in his office because it’s more than that. He pulls her onto the elevator.

Gloria tells Zoey she throws a good memorial and says she can throw hers. A DEA guy comes in asking for Gloria and says he’s investigating Dr Roman’s stolen card. She tells him it’s good and she’s glad that she’s there. She lines up pee cups and tells the people they know the drill. Jackie comes and takes the cup and tells Gloria that she’s screwed but Gloria says her test will be delayed until her foot has healed. Jackie says she doesn’t want her to cover for her and Gloria says she’s only allowing her time to heal. She asks if Jackie needs another pill and she says she does.

Antoinette and Eddie are out to lunch. He pops on his reading glasses and she teases him then asks to borrow them so she can order. He tells her she looks great in them. He says the restaurant used to be a bath house. She asks if he has a girlfriend and he says not really. She asks how long he was sleeping with Jackie and he says it’s been over for a year and they slept together for about a year. She says they still seem connected.

Coop and Carrie are having sex on the roof on a gurney under a blanket when a helicopter hovers over them. She laughs and says they’ve been busted by a traffic copter. Jackie comes home and finds Grace giggling with a boy. Jackie asks what the heck is going on and Grace says this is Tommy. Another kid comes out of the kitchen followed by Frank who says these are his boys and also introduces Joey. Jackie says she’s heard a lot about them.

In the kitchen, Frank says she told him to call them so he did. He says it was hard but he’s really glad he did it. He tells Jackie that he misses her and says they could still be great together and they can have them, family and be happy. He asks if she wants it and she smiles at him. His kids call him over and Frank tells her not to go anywhere.