Paris Jackson Engaged To Mystery Boyfriend – Pregnant With His Child? 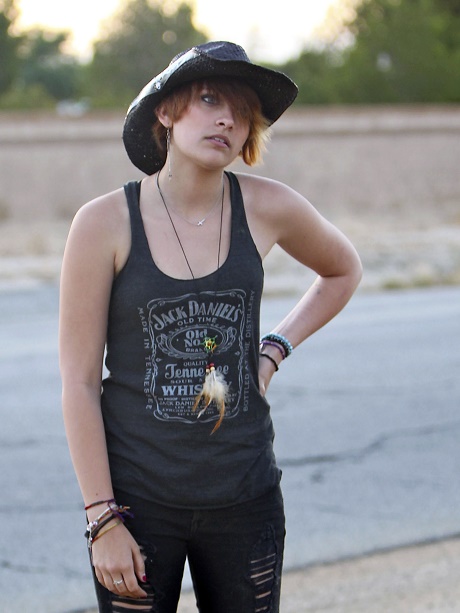 Paris Jackson is only 16 years old, but she’s reportedly engaged and pregnant! This is the kind of thing that’s more prevalent in Hollywood, but especially when you’re lacking a strong mother figure in your life. Katherine Jackson can only do so much, and it’s starting to look like Debbie Rowe should have gotten custody after all. The fact that after everything she went through, the clearly-still emotionally damaged Paris getting married and having a child at such a young age is disturbing – especially when she’s barely fit to take care of herself, much less another human being!

Paris and her mystery boyfriend [who still remains unidentified] were reportedly spotted shopping for an engagement ring recently, and now rumors are claiming that the starlet is pregnant with her first child.

According to British tabloid The Daily Star, eyewitnesses spotted Paris and her boyfriend out to dinner. What caught their eye was Paris toasting with water as opposed to alcohol, with the witnesses adding, “I saw her at dinner and she twice made a toast drinking water instead of wine. It’s highly unusual to toast with anything but a full glass of wine.”

These same sources revealed that Paris had a ‘prominent stomach bulge‘ during the dinner, which is definitely unusual for such a skinny girl.

Now, I wouldn’t take this as proof that she’s pregnant – maybe she just put on a few pounds and stopped drinking alcohol – but it’s certainly alarming. The girl is only 16 years old, and she’s only been dating her mystery boyfriend for a few months. I don’t know how old the guy is, but I’m guessing he can’t be that much older than Paris.

It would be a massive scandal for Paris to actually go through with either the wedding or the baby, but at 16, she won’t be able to get married without notarized consent from a parent or legal guardian [in California]. Honestly, there’s no way in hell that I see Katherine Jackson approving that engagement and marriage. Then again, she and her boyfriend could easily travel to any other state that allows teen marriage, especially since she’s [supposedly] pregnant.

Will she go through with it? That remains to be seen, but I wouldn’t put it past her family to kidnap her again in order to stop that from happening. Is Paris Jackson pregnant? Is Paris Jackson engaged? Tell us your thoughts below!