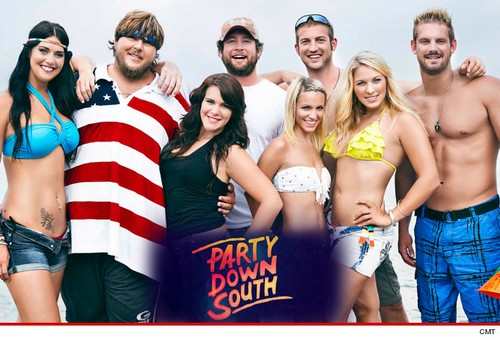 CMT’s Party Down South airs tonight with a new episode called “Lil Bit of a Problem”. On tonight’s show episode the gang starts their new job and gets wild in downtown Athens while checking out the local party scene.

On the last episode, settling into their new digs in Athens, Ga., proved to be no easy feat for the gang. Daddy’s erratic behavior was starting to convince the housemates that there may be something brewing between him and one of the roomies.

On tonight’s episode the gang starts their new job and gets wild in downtown Athens while checking out the local party scene. Daddy struggles to hide his secret about Lil Bit, and when she gushes about her boyfriend, he finally explodes. While the house takes the brunt of the damage, his friendship with Lil’ Bit may never be the same again.

Tonight’s episode looks like it is going to be great and you won’t want to miss it, so be sure to tune in for our coverage of CMT’s Party Down South, “Lil Bit of a Problem” at 10:00 PM EST! While you wait for our recap hit the comments and let us know how excited you are about the show so far.

Tonight’s episode of Party Down South kicks off where we left off last week, the roommates are all sitting outside at the bonfire. Ryan is furious because Lil Bit is still talking about her new boyfriend, who is a country music singer. Lil Bit hooked up with Ryan for the past year, but none of the other roommates know it. They all head inside to play charades, then they decide to install the stripper pole that Walt picked up on the way to the house.

Lil Bit and Tiffany give the stripper pole a shot, but they keep falling. Lyle decides to put on his “sexy man underwear” and show off his skills. He makes $3.00, but unfortunately breaks the pole.

The next morning, Lauren, Lyle, and Walt head to work. Lauren makes Walt and Lyle late, and then nearly kills them driving to work. Not only does she get in multiple almost accidents, she drove right past the kayak place they are supposed to work at. They finally arrive and the boss instructs them to pressure wash the garage.

Back home Tiffany receives a phone call from her boyfriend and begs him to come visit her, she wants him to come at the same time that Lil Bit’s boyfriend Grant comes to visit. At work Lauren, Walt, and Lyle are discussing Lil Bit and Ryan, they are certain that they hooked up. Lyle vows to get to the bottom of it.

Later on Lil Bit receives a phone call from Grant and Ryan lays on the couch and watches her on the phone. Lil Bit just met him and she is already being a jealous psycho; Ryan thinks that she might actually like him. Lauren can’t believe how fast Lil Bit can turn in to a Lil Bitch.

Lil Bit, Lauren, Ryan, Lyle, Walt, Murray, Mattie, and Tiffany all arrive at the bar and begin dancing and drinking. After a few rounds of shots Lyle runs to the bathroom to throw up, then he screams that he doesn’t “Throw up he throws down!” He heads back out in to the bar and after several attempts to pick up girls, he picks a fight with a few guys. Lil Bit grabs Lyle and Ryan and puts them in a cab and takes them home because they are so drunk. Lyle takes the opportunity to call Lil Bit out and ask them if they were hooking up. Lil Bit denies it and Ryan starts cursing her out and says that she played him and has been “living two lives.” Lil Bit begins crying because she never met to hurt Ryan, they were supposed to be best friends.

The cab drops them off at home and Lil Bit runs upstairs to her room. Meanwhile, Ryan proceeds to trash the entire house. Lyle finally gets him to stop breaking stuff and heads upstairs and finds Lil Bit packing her bags so she can go home. Ryan heads upstairs and asks her if she is really leaving, and he says “Good” and storms out.

Walt, Tiffany, Murray, Lauren, and Mattie arrive at home and are shocked to see the house trashed and Lil Bit’s stuff gone. Ryan confesses to Tiffany and Lauren that he hooked up with Lil Bit the day before they arrived at the house, and she never told she had a boyfriend. Tiffany leaves Ryan on the porch, trashing the furniture, and heads outside to look for Lil Bit.

Tiffany finds Lil Bit crying in her truck outside. Lil Bit tells Tiffany that they got drunk and hooked up once, she says that Ryan is just upset because she wants to be with someone else and not him. She doesn’t want to have to tell her boyfriend about what happened between her and Ryan. She decides to go talk to Ryan and make amends with him.

She heads inside and tells Ryan that she thought they were just friends with benefits, and from now on she just wants to be friends.

Ryan doesn’t want to hear it though; he feels betrayed and feels like he is a sucker. He admits that he has real feelings for her, and she hurt him by hooking up with another guy. Lil Bit starts crying and Ryan feels guilty and hugs her and tells her they’re still best friends. Ryan gets upset all over again and tells her that they’re not friends anymore and curses her out and storms out of the room.