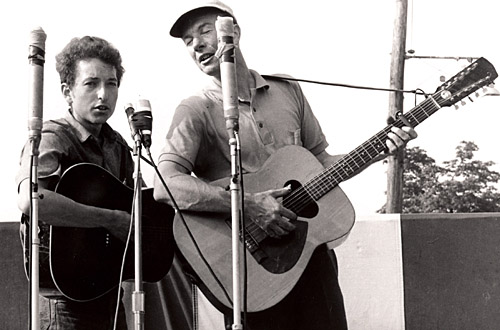 Songwriter and famed folk music revivalist, Pete Seeger, has passed away at the age of 94. New York Times reports that Seeger’s grandson, Kitama Cahill Jackson, confirmed that the songwriter died of natural causes at New York-Presbyterian Hospital on Monday, January 27, 2014. Seeger’s career was an interesting one- He went from receiving a conviction for contempt of Congress in the 1950s to performing on the steps of the Lincoln Memorial at an inaugural concert for Barack Obama. In between those instances, Mr. Seeger cultivated a musical journey that carried him from performing at labor rallies to writing top 10 hits like The Byrd’s Turn, Turn, Turn and performing hits like Lead Belly’s Goodnight Irene with his folk group, The Weavers.

Seeger was known for his performances of traditional music, but he also wrote hits like “Where Have All The Flowers Gone?” and “If I Had a Hammer,” which was made popular again by Peter, Paul, and Mary in the early 1960’s. Pete Seeger was a true innovator both in music, and the folk movement.

Seeger’s career first took off in the early 50’s, when Seeger was still performing with The Weavers, however that chapter in his journey quickly ended when “Red Channels,” a pamphlet that listed performers with suspected Communist party ties, was released with Seeger’s name on the list. This revelation led to the end of television appearances for The Weavers, and Seeger later faced a conviction and one year prison sentence for Contempt of Congress for his ties to the Communists. But when Seeger was released in 1961, his musical career was revived, as was his mission to expose the world to the traditional music he loved so much. “We Shall Overcome” was a song Seeger adapted from old spirituals that would become a popular civil rights theme during the Civil Rights Movement.

Mr. Seeger was born on May 3rd, 1919 to musicologist Charles Seeger and violinist Constance de Clyver Edson Seeger. He would learn to play the ukelele while attending boarding school at Avon Old Farms in Connecticut, and later picked up the five-string banjo after attending a square-dance festival in North Carolina with his father. The banjo would become Mr. Seeger’s signature instrument.

When Mr. Seeger continued his education at Harvard, he was introduced to a young blues musician by the name of Huddie Ledbetter, better known as Lead Belly. Later on, Seeger would meet Woody Guthrie at a benefit concert for California migrant workers in 1940. The two traveled together for awhile before Mr. Seeger was drafted into World War II. After his return from war, Seeger, Guthrie, Lee Hays, Ronnie Gilbert and Fred Hellerman formed The Weavers.

Pete Seeger would go on to become a mentor to folk music pioneers like Bob Dylan and Don Mclean. Later in his career, Seeger was inducted in the Songwriter’s Hall of Fame in 1972, and then later he was also inducted into the Rock and Roll Hall of Fame in 1996 as an early influence. His other awards include the Lifetime Achievement Grammy Award and the National Medal of Art Award, the United States’ highest arts honor, which was given to Seeger in 1994 by President Bill Clinton.

Pete Seeger continued to perform throughout the rest of his life, even celebrating his 90th birthday with a benefit concert at Madison Square Gardens, which also included performers such as Bruce Springsteen and Dave Matthews. Mr. Seeger’s death follows that of his wife, Toshi, who passed away in 2013 just days before their 70th wedding anniversary. Survivors include Seeger’s son, Daniel, his two daughters, Mika and Tinya, a half-sister, Peggy, and six grandchildren.