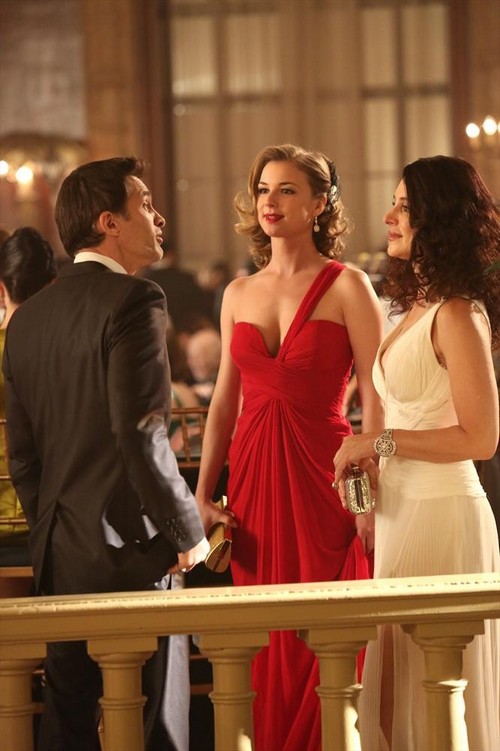 Tonight REVENGE returns to ABC for another exciting episode called “Addiction.” On tonight’s episode opening night Emily looks into a mystery from the past, and her newly single status proves to be an asset as she plays detective. Meanwhile, Pascal wastes no time as he attempts to reconnect with Victoria.

On tonight’s episode he notorious Pascal LeMarchal’s unexpected visit reverberated throughout the Hamptons, Emily and Victoria went head to head in a very public showdown.  Did you watch last week’s episode?  We did and we recapped it right here for you.

On tonight’s episode Emily uses her newly single status to unravel a mystery from the past as Pascal attempts to make up for lost time with Victoria.Emily turns the tables when Victoria crashes casino night.  “Addiction” was written by Joe Fazzio and directed by Tara Nicole Weyr.

Tonight’s episode of Revenge begins with Victoria Grayson returning another one of Pasquale’s lavish gifts to him. She informs him that she cannot be bought and he does not know her, nor what she wants. And, then she storms out.

Nolan and Emily are still trying to make sense of the letter they found that was written by Pasquale. Nolan is hacking into international business records looking for the initials “TJM,” but narrowing it down could take years. Emily says she can’t wait any longer, she is just going to go to the source- Pasquale, and do what she can to get closer to him.

Daniel enlists the help of his sister Charlotte to help him get revenge on Emily for lying to their entire family and faking her pregnancy. Charlotte agrees, but only if Daniel leaves Jack Porter out his revenge scheme.

Stevie and Jack are at the tavern eating breakfast and reading articles about Stevie and her “secret son.” Stevie confides in Jack that Conrad wasn’t always a horrible person, she actually met him on a blind date and he was really sweet to her.

Conrad meets Pasquale for drinks and laughs at him for renting a priceless painting from the museum for Victoria because it was her favorite one on display. Conrad made a deal with Pasquale and promised he would help him win over Victoria, so far – it’s not working too well.

Victoria has drinks with her minions and discusses her old flame Pasquale and her ex-daughter in law Emily. She tells her nosey old friends to keep any eye on Emily, she still doesn’t truth her. She wants her to leave town, but for some reason she won’t, even though there is nothing for her in the Hamptons anymore. Conrad shows up and serves Victoria an eviction notice that Stevie left handing on her door. Victoria throws it away, and tells him to get out.

Margeaux receives an offer for an editor-in-chief position in Rome. She informs Jack she won’t take the position, she loves him too much and she doesn’t want to leave him. Jack wants her to take the position, he can’t stand the idea of “keeping her from something that keeps her truly happy.”

Emily tries to talk to Pasquale at the bar but he blew her off. She did manage to swipe his gold chip that he is always carrying around. After some research she and Nolan find out it is actually a poker chip from an exclusive $1 Million game. Emily realizes he is a “gambling man.” Emily pays him a visit and invites him to a Monte Carlo gambling charity event for an organization he supports. He really has no reason to not show up.

Emily heads to the tavern and sits down with Stevie, she wants some inside info on Pasquale. According to Stevie, Pasquale actually dated Victoria first, and then when Stevie got out of rehab Conrad was with Victoria and Pasquale was gone. Stevie takes her grandson outside to look at the boats and Jack joins Emily. She reveals to him that she and Aiden broke up and he comforts her and holds her hand, Margaux watches them through the window of the tavern from outside, obviously jealous.

Victoria is joking around with Daniel, and he is shocked when she reveals she used to date Pasquale. According to Victoria she met him at a booth at a flea market in Paris, and he taught her “how to trust. One day she caught him in bed with another woman, and they broke up.

Aiden tracks down Aiden, but he is less than thrilled to see her. She tells him that she misses him and he says, “yeah that’s what happens when people break up, it’s called moving on.” He makes it clear he wants nothing to do with her and storms off.

Conrad arrives at Stevie’s door, obviously drunk, and very upset. He just learned that Jack Porter was her son. He realizes that she had Jack while they were still married, and even if Jack wasn’t his son he had a right to know-despite how drunk she was at the time.

It’s time for Monte Carlo charity event, Daniel shows up even though she didn’t invite him. He tells her that the only reason anyone showed up to the event was to see how much of a train-wreck she had become. Emily tries to talk to Pasquale, but Victoria drags him away from her. She tells Pasquale that Emily is “playing him” just like she did Daniel. Pasquale wants Emily and Victoria to play a hand of poker together.

Javier bumps into Charlotte at Monte Carlo, and they introduce themselves to each other. They are hitting it off when Nolan crashes their meeting. He reminds Javier that he is supposed to be on house arrest. Javier kisses Charlotte and then rushes back to Nolan’s house.

Jack arrives and Margeaux reveals that she and Daniel worked together and forcer her Dad Pasquale out of the magazine. So, she isn’t going to Rome. Margeaux accuses Jack of encouraging her to go to Rome so that he could be alone with Emily. Jack denies it, and reassures Margeaux that isn’t the case.

Stevie is sitting in her hotel room discussing the past with Conrad. He admits that he loved her and they had some “very good years.” He apologizes for dragging her into his current drama with Victoria. Stevie tells Conrad she wants to get “something else off her chest.” She hands Conrad a paper labeled “property deed.”

Meanwhile at Monte Carlo Night everyone is gathered around Emily and Victoria’s poker game. Emily calls her bluff and wins the suspenseful hand, Pasquale takes Emily’s hand and leads her away from the table, leaving Victoria sitting there looking stupid.

Pasquale takes Emily back to his room, he says that he only brought her home with him because he knows that she is chasing after him for something other than sex. Emily claims she wants to sell Grayson’s family secrets to his magazine.

Jack returns home and finds Stevie waiting up for him. She tells him that Conrad came by her suite to talk, and she was scared she might have a drink afterwards and fall of the wagon. So-she came to him and Carl. She excuses herself and says she needs to head home and have a “good night’s rest” and she will feel better. She heads downstairs and pours herself a drink, and then dumps it out without taking a sip.

Victoria arrives at Pasquale’s room, and thanks him for his recent gift, the property deed that Stevie gave Conrad.

Emily heads to Nolan’s house and reveals that she bolted form Pasquale’s room because he had a hidden camera and was trying to tape her. She also knows that Victoria let her win the poker hand, she could tell by her facial expression, she thinks Victoria is up to something herself. Aiden barges in and announced he is here to help Emily and Nolan with their Pasquale problem. He knows who “TJM” is in the letter Pasquale wrote…Trevor James Mathers, Aiden’s own father.