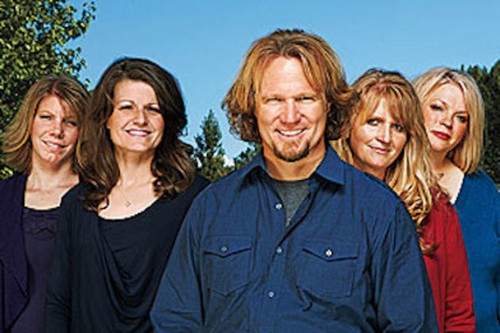 TLC’s reality show SISTER WIVES returns tonight with its seventh episode of season five. Tonight’s episode is called, “Every Brown Revealed” and on tonight’s show Kody, his wives, and all of the children work to compile photos and videos that bring new life and new understanding to the family.

On the last episode, the Browns took a road trip for Spring Break on Route 66 to Missouri to visit a non-Mormon polygamist clan, but cramped quarters in two RVs created tension among the traveling companions. Did you watch the last episode? If you missed it we have a full and detailed recap, right here for you.

On tonight’s episode Kody, his wives, and all of the children work to compile photos and videos that bring new life and new understanding to the family. Insightful details and shocking secrets emerge to give an even deeper look into what makes this family so extraordinary.

We will be covering Sister Wives tonight at 9:30 PM EST so don’t forget to come back to this site for our full and detailed recap. Make sure to refresh often to get the most recent details. While you wait for the recap, let us know how excited you are about the new season of Sister Wives.

On tonight’s episode of Sister Wives, the family takes a look back on how far they’ve come since Kody and Meri were first married. They’re even hosting a video and slide montage night just to commemorate.

The videos start from when Kody and Meri met and started dating. Then the adults start to talk about how his relationships with his other wives came to be. Both Janelle and Christine knew Meri before they met Kody. Janelle actually used to work with Meri so she used to hear all the stories about how great Meri’s boyfriend was. Hence there was a bit of buildup prior to eventually meeting Kody. Then when she did join the family – it honestly wasn’t all that romantic. Janelle and Kody hadn’t known each other all that long and their marriage started off more on a pragmatic footing.

While Christine, like usual, was a whole other story. She practically threw herself at Kody because she fell in love with him from early on. But the early days weren’t easy for them. They all had to live in secret and that meant (especially for Janelle and Christine) they would often have to hide or at least lie about their families. They couldn’t claim Kody as a husband. So, to other people, it looked like they were always pregnant with no father in sight.

And though Kody would be around as often as he could – he was a traveling salesman with two other wives. Which meant the older children in the family were kind of forced to grow up too early. So Logan became the ring leader. He would help his mom and other mothers to keep the younger children in line. Aspyn was the same with her own mom. When Christine would be out working – she admits there were times her daughter basically raised the other ones.

Only Mariah was different. She was like an only child and at the same time she came from a very large family. By time Marriah arrived, Meri had resigned herself to not having kids. It just never seemed to work out for her. Meri didn’t get married for a good few years into her marriage so Mariah is really her miracle child.

Then there are the other children. Middle children are known for being hectic and there were a lot of kids stuck in the middle. So they each chose a way to shine among their siblings. Some chose to be rebels, others to stand out in sports, or become a future navy man. But as long as they kept their individuality – how could their parents complain?

[10:03:48 PM] Kristine Francis: Although the younger children aren’t exactly angels. One of them even started getting called Pixie for her dual personality. She could either be nice or mean. There was never a middle ground. And Janelle’s son Gabriel (while a genius) can be as equally dangerous as his older brothers. Her boys love to fight. Even if it’s merely for fun. That’s why she was worried about having another child after Gabriel though ultimately her last son didn’t stop her from having another daughter.

Family life was busy as it and the truth of the matter is that it only got busier with Robyn joining the family.

When Robyn joined the family it was a very different atmosphere than when the other wives joined. Janelle and Christine came into the family back when there weren’t any kids. Back then it was all about the adults finding a way to become comfortable with each other, but Robyn entered the picture when the others had their children and after already having children of her own.

Meri was able to accept easily. It had hurt welcoming in the other wives and then again she didn’t have her daughter or thought she was capable of children when other women came into the family. So having Meri and being married for twenty years by then helped her not to view Robyn as a threat to her relationship with Kody. Christine was probably the one that had the hardest time accepting a fourth wife yet she did come to see Robyn as a great addition.

So despite all their problems, the family has come together and though many continue to not understand; the Brown family works as they are!