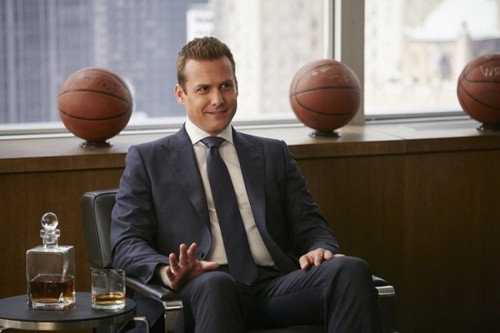 SUITS returns to the USA network tonight with an all new episode called, “We’re Done.” On this evening’s episode, Rachel brings disturbing news while Mike is still reeling from the aftermath of the battle for Gillis Industries.

On the last episode Harvey tried to end the takeover when Sean Cahill brought Pearson Specter client Logan Sanders to the SEC for questioning. Elsewhere, Louis found a way to make a name for himself when Mike insisted on playing hardball. Did you watch the last episode? If you missed it we have a full and detailed recap, right here for you.

On tonight’s episode Rachel brings disturbing news while Mike is still reeling from the aftermath of the battle for Gillis Industries. Feeling Harvey is his only friend left, Mike makes a rash decision; elsewhere, Jessica asks Louis to pick his own reward after his victory for the firm.

Dealing with slime like Forstman has cause nothing, but trouble for Mike. Sidwell fired him from his job after he found about Mike’s betrayal (thanks in large part to Forstman’s large mouth) and he also let down Walter Gillis – the man he had promise he was going to save the company for. So his life was already heading towards the craper and thankfully was able to realize it before she could make his life worse. Although Rachel had to go back on her word to Donna. Earlier, she had told her friend that she was going to confess about her kiss with Logan but now with Mike feeling like the way he is – she astutely side tabled the conversation.

People who actually care about Mike knows that he needs only support at point in his life. That’s why Rachel is solely focusing on propping him up and why Harvey is attempting to win back Mike’s job for him. Though convincing either Jessica and Sidwell to take Mike back isn’t easy.

Harvey may trust Mike but no one else does. Not even Forstman who made a final job offer to Mike trusts him. And at this minute, he’s dangling a million dollars sign on the dotted line fee over Mike’s head. So Mike could go work for a man he doesn’t like nor respect or he could choose a third option which is to wait it out.

Mike never wanted to be an investment banker and pretending to be a lawyer only made him feel like the fraud he was. But if he simply sits back and enjoy a time of re-evaluation then maybe he could find a legally appropriate job that makes him happy and he came to this conclusion after having a chat with Stan Jacobson.

Hence Mike was in a good place when Rachel’s guilt weighed too heavily on her – she blurted what happened with Logan and that sent Mike into a rage. He went to Logan’s apartment and beat the man to a pulp. Though Logan did a lot more damage with his words. He prayed on Mike’s insecurities by going into graphic detail about how much Rachel enjoyed their kiss.

Afterwards, all Mike needed was answers from Rachel. He needed to know if the kiss meant anything and so he confronted her which Harvey had warned him not to do. He specifically told Mike to calmly speak with Rachel and instead he came at her with righteous indignation. He demanded to know what the kiss meant and without Rachel having to say a word – he saw the answers written all over her face.

Thus, he ended their relationship on a sour note!

Rachel was left devastated by the break up. Louis saw her crying her eyes out in the copying room and came to her aid. Prior to that he was selfishly looking up ways to get as much as he could from Jessica for saving the firm from the Wexler shares yet helping Rachel through her crisis put things into perspective for him. He realized that becoming a name partner isn’t the most important thing in the world – it was him and Sheila that mattered.

So he lowered his demands with Jessica and told her that he was going to try and win back his ex. And like a good deed that kept on giving – Jessica realized she needed to take care with her own relationship as well. Jeff hadn’t liked the way she handled the Wexler shares and sure as hell didn’t like that she sent in Louis of all people to check up on him. Jessica is going to work on getting back into his good graces.

Louis dirty dealing with Forstman didn’t just end at the shares. Forstman proceeded to implicate Louis in a money transaction thereby guaranteeing the other man would never rate him out. And it’s while Louis was feeling dejected that he saw Mike heading into Forstman’s office. Mike was going to take a job there and Louis couldn’t let a friend, despite what he did with Sheila, get caught up with someone like Forstman. So, rather than use his favor for himself, he got Mike hired back at the firm.

It was time Mike came home and with Harvey siding with Louis – Jessica was pushed into agreeing. So Mike is back and as of yet his relationship with Rachel remains in limbo. He needs to figure out if he could get over her cheating on him.