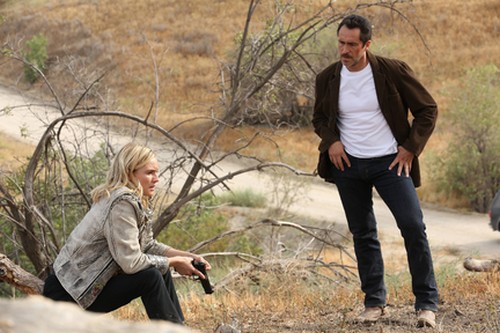 On last week’s episode Marco became Fausto’s ticket to freedom; Sonya attempted to interpret Eleanor’s ledger. Captain Robles was about to finally be brought up on rape and other criminal charges and yet Steven didn’t know that. All Steven knew was that he wanted to get revenge for Eva even though Eva had asked him to start a new life with her away from crime. Did you watch the last episode? If you missed it, we have a full and detailed recap right here for you.

We will be blogging The Bridge’s season 2 finale episode with all the up-to-the-minute details at 10PM EST so make sure to come back to this spot and watch the show with us. Make sure to refresh often so you get the most current info! In the meantime, sound out in the comments and let us know what you think of the series.

RECAP: The drug war in Mexico is actually a lot more complicated than any one organization would want you to believe. On tonight’s episode of the Bridge, Lieutenant Wade finally found concrete proof the CIA had been having their own dealings with the notorious drug dealers across the border.

He found and stopped a shipment of theirs. And inside of it there was wall to wall packages of heroine. As if its origins was always American rather than Mexican. Hank immediately called Sonya afterwards to tell her about the catch, but she was so close to finding her own evidence that she completely ignored both his good deed and his dire warnings. Hank had told her to be careful around these CIA guys. They’re dirty and he didn’t want her to risk her life when he already found enough to call that entire division into questioning.

But she didn’t listen. Sonya conducted her own (off the books) stakeout and when she witnessed that the CIA were willing to dirty their own hands by carrying out personal assassin missions – she even tried to swoop in and save the day.

It was quite noble of her. However it was also naïve of her to enter a compromised location without back up. She was quickly overtaken. And if she hadn’t been a cop – she been by now. Instead she ended up with a slight bump on her head and whole lot of embarrassment after Wade showed up at the scene to ask her what happened.

It’s not like Wade was alone either. He brought a federal investigator with him!

What happened can be solved with two words – Agent Buckley. He’s the CIA go to man whenever something dirty needs to be carried out and despite knowing all of this Sonya continued to underestimate him. And now she’ll never get the chance to make it right or see justice done!

Buckley was killed by his own people after it became pretty obvious his name was identifiable with the likes of Nacht and Fausto. When Daniel and Adriana had sat down for a meeting another agent – they were told Buckley was going to be put on leave while he undergoes a psyche evaluation. Yet what they really meant was that he was going to be taken care of in a different sense.

The CIA is cleaning up things on their end and Sebastian is doing the same on his. He let Nacht have her father back and then he seemingly abandoned his own daughter. Whatever happened to the rescue mission he was planning on!

Luckily, not everyone abandoned the poor girl. And Ruiz even chose to help her after it was no longer convenient for. He took care of her. And working together they managed to overwhelm Fausto and his men. Although the young woman was shot in the process.

Ruiz later got her to the hospital with Sonya’s help and then he had asked a favor. He told Sonya to not tell anyone about the girl. He didn’t want to risk her and more importantly he rather everyone not know that he was taking Fausto in alive.

And so Sonya waited until he cleared the hospital before she did yet another ill-advised thing. Sonya called Sebastian herself. She wanted him to know that Fausto was going down and that things weren’t going to look good for him. And in return for this information (plus his daughter’s whereabouts) – she merely wanted one thing and that was Nacht.

Sonya wanted justice for the teenager Nacht killed and yet given the opportunity she ended up saving Nacht’s life.

Nacht had taken her father back home. There she tried to taunt him by tying him to a pipe and daring him to fight her. And for a man that’s been locked up for years because of her – his rage was able to surpass one little pipe.

Sonya found them with the father chocking the daughter and chose to save the daughter. However she didn’t want to do next so she called Ruiz and he told her to take Nacht for a drive while he handled disposing the body.