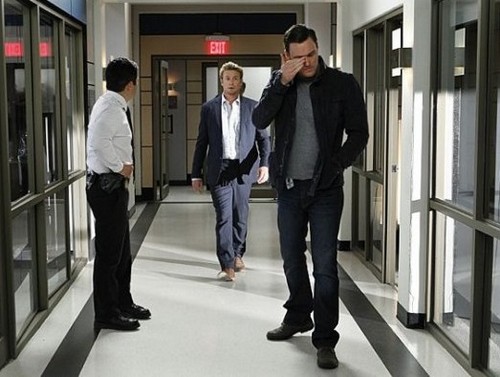 THE MENTALIST returned tonight with another new episode and we saw the return of Rigsby and Van Pelt. I cannot wait to see next week’s show.  Good news, we have a sneak peek video and some insight for you below on what is going on next week’s episode 15, “White as the Driven Snow.”

On tonight’s episode a homicide at an oil-fracking site was investigated by Jane and Fischer. Elsewhere, the hunt for suspects who are attacking ex-CBI members led Rigsby and Van Pelt to Austin.   More happened!  Did you watch tonight’s show?  We did and we recapped it right here for you.

Spoiler alert: If you’re one of those people who doesn’t like spoilers, stop readingnow! We have some juicy spoilers for you about the season 6 episode 15 of CBS’s “The Mentalist.”

CBS Official Synopsis: “Grace is kidnapped by the killer who has been hunting former CBI members, but when the prime suspect appears to have an airtight alibi, Jane must rely on all his skills to locate her before time runs out.”

On next week’s episode Jane and Rigsby race to save Van Pelt from the killer who is hunting former CBI members.  Can Jane & Rigsby save Van Pelt before a killer takes his revenge?

The Mentalist Season 6, Episode 15 “White as the Driven Snow” airs on CBS on January 12th, 2013. Check out the preview videos from episode 15 below and let us know in the comments below what you think.