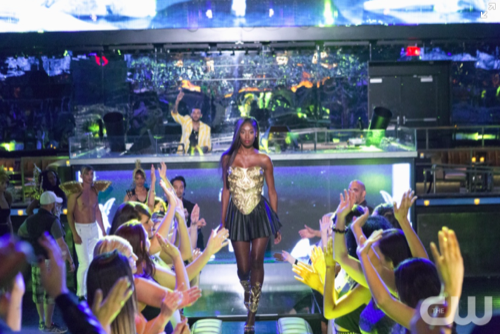 CDL also has a full recap of America’s Next Top Model right here. Don’t forget to keep checking CDL for all your ANTM cycle 22 needs and wants!

How do you feel leaving the competition?

“I actually feel good walking away. I learned so much, and the experience was amazing. I didn’t win, but I gained a lot.”

“I don’t think it was a distraction, for me. Mikey was always flirty from day one. It was just fun and we are still friends. We got to know each other after we won the challenge with Mame, and we just clicked from there.”

How did you manage to change the dynamic with Mame. The season started with a lot of tension between the two of you.

“I was there and trying to be focused, however, I totally butted heads with Mame at the beginning because we were so alike. She was a threat to me, and I was a threat to her. It’s a competition and we saw each other as our biggest rivals. I basically tried to stay away from her, but eventually we saw how alike we were. Sometimes when you are so alike with someone else, it’s actually harder to forge a friendship. Eventually, I loosened up and we were able to get past it.”

You managed to steal the focus in Mame’s shoot, but didn’t have that same magic in your shot. What do you think was the difference or the reason behind that?

“I felt focused in my shot, but it was different because the pressure was off. It was Mame’s shot, and I just had had fun with it. The pressure was gone, and I was feeling very accomplished having made it to Vegas. I struggled so much in the beginning, but I learned so much and started to get into things. I was actually really surprised I went home.”

Is there a piece of advice that you felt stood out to you and will resonate in your future projects?

“100% of the advice has helped, but Tyra pointing out that my profile is my million shot, was a highlight. I never knew about angles, obviously as everyone saw, but her tips have helped with all of that.”

What’s next for you?

“I’m actually working on a book. It will be out at the end of the season. I hope people will read it and understand me better. It’s all about attitude, self-esteem, and confidence. It’s more of a self-help book that shows who I truly am.”