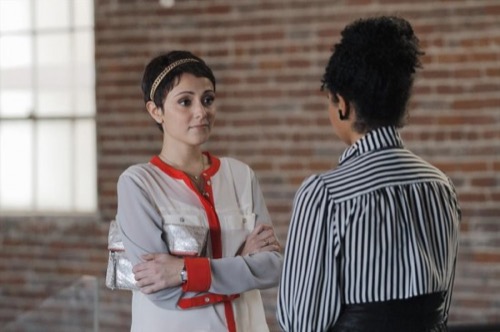 Chasing Life returns to ABC Family tonight for an all new Monday February 23, season 1 episode 17 called “Model Behaviour,” and we have your weekly recap below. On tonight’s episode, April’s [Italia Ricci] job is in jeopardy because of an article she wrote.

On the last episode April got some welcome news from Dr. Hamburg that boded well for both her and Leo. At work, she got wind of a possible story opportunity with baseball player Richie Miranda, but when she got a bigger scoop than she bargained for, she was faced with a tough moral choice. Meanwhile, Leo grew increasingly uncomfortable living in the shadow of his family and their wealth and looked to Sara for guidance. Sara felt a need to make more of a positive impact with her therapy work after a clash with her office neighbor, an immigration lawyer. And Greer made a bold change in her behavior at school that intrigued Brenna. Did you watch the last episode? If you missed it, we have a full and detailed recap right here for you.

On tonight’s episode as per the ABC Family synopsis, “April’s job is in jeopardy because of an article she wrote. Meanwhile, Beth hires Brenna and Greer to be models in a fashion show; Emma dodges questions about her recent high-school reunion; and a surprising admirer requests a date with Sara.”

April is suffering some backlash because of what she did last week. It seems that after breaking the story of her career, the good people of Boston are actually turning against her for tattling on a famous baseball player’s drug usage instead of thanking her for uncovering potentially scandalous, and world series costing, habit. And funnily enough it’s not just random people on street that’s gunning for her. April’s own grandmother is upset about what she did.

Yet, for the most part April tried to keep seeing the bright side of things. She was in the news after all and technically everyone in the city was talking about her article. So, for a while at least, April counted the fallout as a win.

But then the baseball player she wrote about accused her of making up the whole thing. And suddenly all that fame April was just enjoying, wasn’t all that fun anymore!

She now needs someone to corroborate her story and the only person that can do that is Leo. The same Leo she hasn’t talked to since the incident because they’re on a break. And the same Leo that could get into trouble of his own if he testified on her behalf.

So for the time being, April tried to handle everything on her own. She went to work everyday like nothing was wrong and at home she played the whole thing off. She would joke around with Beth and later she even helped her friend find teenage models.

However, this thing about her story wasn’t going away. In fact it got worse! The baseball player she had accused of taking drugs had gone on to pass his drug test. So now he had a case to sue April and the paper. And in order to keep her job – April was told by her publisher (after her boss had gotten fired because of her) that she had to do an interview on national TV.

She either defends herself and her paper or she could be out of a job by the end of the week.

Which is ridiculous because she has an eye-witness. If she just calls Leo then he could probably help her. But seeing as she doesn’t want to speak to him just yet – he’s been left out in the cold. And things have gotten so bad that even Sara is wondering where Leo is.

Recently, Sara and Leo have bonded. It seems that she’s been counseling him on the side so made her feel like she truly knows him. And although she knows he isn’t the greatest of shapes – the truth is she doesn’t know how bad he really is. Her daughter hasn’t told her about finding Leo doing drugs and so Sara still has the impression of Leo being a good guy underneath it all.

Yet who can tell nowadays!

Hence, Sara continues to remain oblivious about mostly everything. And sadly that’s not even a joke. Sara for example only found her elderly mother has a boyfriend because Emma decided to tell her rather than lie. But there’s plenty of other stuff that’s she obviously hasn’t picked up on. Like this thing with Brenna and Greer. Sara doesn’t know that Brenna and Greer have been hanging out again and on top of that it took Sara a good minute to figure out the immigration lawyer, that she shares her office space with, also has a thing for her.

So Sara has to decide if she wants to start dating again and in the meantime her daughters have to decide what relationships they want to fight for. Because Greer is quite a handful (especially when she’s not on her medication) and it really isn’t fair to Brenna that she has to be the one to keep monitoring her friend’s ”mood swings”. Yet seeing Brenna fight for someone, even though that other person isn’t all that appreciative, has made April think about a few things.

Later, April did her interview to defend herself and with Raquel’s help she did a pretty good job on TV. However right after the interview, April had gone to bathroom and she saw that her nose had started to bleed. Now that could mean anything but to a scared April – she thinks her cancer is back.

Her career is safe, but is her health declining?