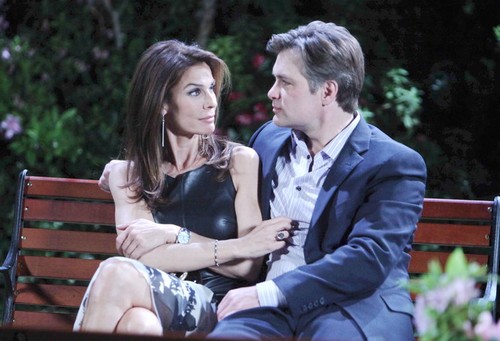 “Days of Our Lives” spoilers for Tuesday, August 11, tease that Ben (Robert Scott Wilson) will be obsessed with the idea that Abigail (Kate Mansi) could be carrying Chad’s (Billy Flynn) child. Ben was already quite possessive of the woman who just became his fiancé. Now Ben is more determined than ever to make sure nothing stands in the way of his future with Abigail. In fact, DOOL spoilers say Ben will soon want Abigail to move away from Salem to keep Chad from interfering.

Meanwhile, Hope (Kristian Alfonso) will wonder what’s up when she learns that Aiden (Daniel Cosgrove) is no longer Clyde’s (James Reed) lawyer. Ever since Hope overheard Aiden and Rafe (Galen Gering) talking, she’s been suspicious of what Aiden knows. Actually, Aiden is about to know more than ever when he begins digging into Clyde’s dirty dealings. Hope will eventually discover that everyone has secrets, including Aiden. “Days of Our Lives” rumors hint that danger is headed toward Hope and Aiden in the near future.

Across town, Maggie (Suzanne Rogers) will reach out to Nicole (Arianne Zucker) in an unexpected manner. Many Salem residents aren’t huge fans of Nicole. Maggie is no exception. Nevertheless, Maggie is making an effort with her future daughter-in-law. It appears Nicole is starting to gain acceptance in Daniel’s (Shawn Christian) circle, but that doesn’t mean she can avoid major snags later on. “Days” viewers know that when everything seems to be going right, something’s bound to go very wrong.

Other DOOL spoilers reveal that Eric (Greg Vaughan) will try to cut Serena (Melissa Archer) a little slack. When Serena came to Salem, she brought plenty of trouble with her. Thanks to Serena’s ties to Xander (Paul Telfer), Eric and Nicole nearly lost their lives. However, Eric is a man of faith and he has a forgiving nature deep down. When Eric realizes that Serena helped save Caroline’s (Peggy McCay) life, he’ll express his gratitude. Don’t expect Eric and Serena to be besties or anything, but at least they can part ways on somewhat good terms. Stay tuned to “Days of Our Lives” to see the tension start to lift.

So “Days” fans, what do you think about the news that Ben will fear the worst about the paternity of Abigail’s baby? Will Aiden get updates on Clyde’s shady behavior? Are you glad Maggie is warming up to Nicole? Will Eric make peace with Serena? Let us know what you think in the comments below and don’t forget to check CDL tomorrow for the latest “Days of Our Lives” spoilers, rumors, updates and news.