Days of Our Lives Spoilers: Was Michael Easton Asked to Return to DOOL as an Older Tanner Scofield? 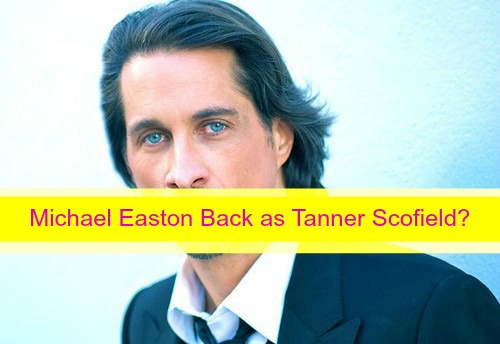 “Days of Our Lives” (DOOL) spoilers include speculation that Michael Easton may have received an offer to return to NBC daytime drama as Tanner Scofield. The speculation comes from something Easton said in his exit interview from his role as Dr. Silas Clay on “General Hospital.”

If you read the exit interview in Soaps In Depth closely you will find Easton gave a vague answer to a question of whether he would consider an offer from “The Young and the Restless” or “Bold and the Beautiful.” Or… would he consider a return to “Days of Our Lives” as Tanner. The actor’s reply was, “Someone called and inquired, but I would have to think long and hard about it. I just want the next part to be the right part.”

Does the answer – yes we agree, it’s vague – indicate that TPTB at “Days of Our Lives” reached out to Easton through his agent? His stay on “DOOL” as Tanner Scofield was brief – 1990 until 1992 – but “Days of Our Lives” ratings are climbing now and this may be the perfect time for the writers to consider writing Tanner back in – and bringing Michael Easton back to where he got his start in soaps.

Of course, it could have been TPTB at “The Young and the Restless” or “Bold and the Beautiful” who contacted Michael. Where could he fit in on “Y&R”? The actor is no stranger to playing a doctor or a cop – and the GCPD is down a detective since Det. Mark Harding’s (Chris McKenna) untimely demise. We’re not so sure if a new character would fit in at “B&B” – but you never know!

“General Hospital” fans are still hoping the new head writers will find a way to bring Dr. Silas Clay back to Port Charles. An online petition asking for Michael’s return as Silas to return had almost 15,000 signatures and fans still gather on Twitter with the hashtag #MichaelEaston to further show their support for the actor’s return to “General Hospital.”

Where will Michael Easton turn up next and will it be any time soon? Come back to CDL often for all of your hot soap news and spoilers!