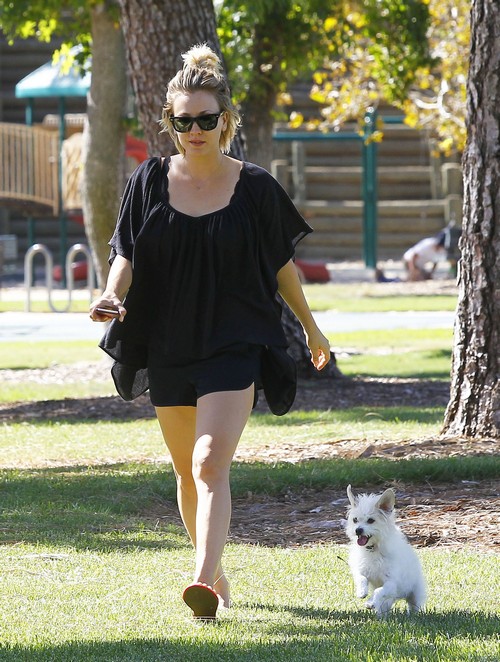 Has Kaley Cuoco’s fairytale marriage to Ryan Sweeting has hit an abrupt wall and her happily ever after has turned to divorce over having a baby? We all knew Kaley and Ryan’s marriage was going to end in quick split right from the start right? And for a number of reasons. First, they dated for just a few months before they got hitched. Second, they met not long after she and Henry Cavill had a public 10 day fling. When you’ve been dumped by Superman, that’s got to hurt. Third, the Cavill affair came just after Kaley admitted she’d ended a multi-year relationship with Johnny Galecki.

So what’s going on with the Kaley Cuoco who loved her hubby so much she added his last name onto her professional name styling herself Kaley Cuoco-Sweeting? Looks like there’s still love there, but was the issue that Kaley has baby fever and her pro-tennis hubby didn’t want to get her pregnant? Baby drama has crushed many a relationship and led to divorce. Kaley Cuoco shared photos today of a fun time she had over the weekend with her friends’ kids at a tennis tournament and seems to be all about the little ones.

Plus, we all know she plays mom to her beloved animals. Also of interest is that Kaley had her people purge her Instagram page of photos of Ryan Sweeting, but there are many, many of Johnny Galecki including one of their TV nuptials. Johnny Galecki has been busy Instagramming photos of friends’ kids too, so maybe he’s also got babies on the brain. Could this be a sign that the on-set pairing may be heating up off-screen once again? Who wouldn’t love that? They’re super-cute together.

Johnny was rumored to have been considering proposing to then-girlfriend Kelli Garner once Kaley got hitched to Ryan Sweeting, but it looks like he’s conveniently free now as well. And Johnny Galecki has Kaley Cuoco all over his social media pages as well. Read between the lines and we’ve got strong indications that these two are on again and may be getting serious fast. We know that Kaley waits about 10 seconds before moving on, so maybe she’s moving even faster when the new guy is an old flame…

Or is the issue that Kaley can’t keep a man period? She was with Ryan Sweeting for about as long as she was with Johnny Galecki – roughly a couple of years. Is that the sell-by date after which no one can stand to be around Kaley Cuoco anymore? She sure is pretty, has a fit bod, and loves animals, but is she just too much to take? She was affectionately intense with Ryan Sweeting and soaked her social media with photos of them so sweetly in love that it could inspire cavities.

Is she just too much to deal with after a longer period? Or perhaps Kaley Cuoco is one of those people who throws all in way too early then things burn out because they burned too hot. And is Kaley busy trying to get Johnny Galecki to get her pregnant? The show is set up perfectly to write in a pregnancy since her character Penny and his character Leonard just got married. Or maybe saying I do on the show had them thinking they gave up on their relationship too soon…

More from CDL on Kaley Cuoco and Ryan Sweeting’s split, baby news and new romance updates as it breaks.