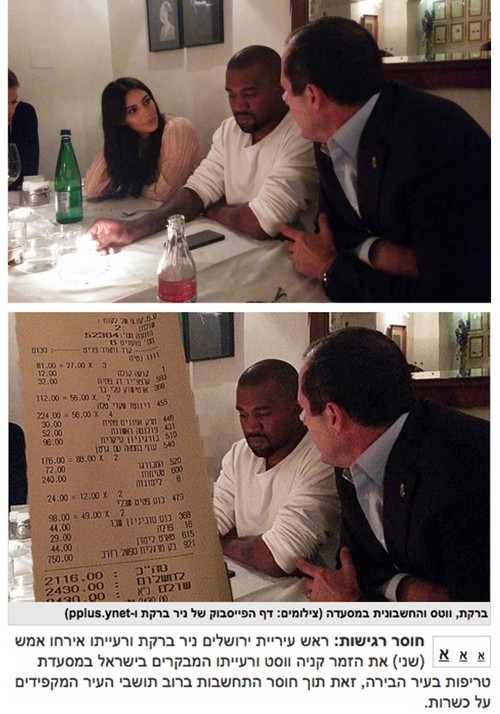 Kim Kardashian is now a world-famous celebrity, despite Hollywood’s best efforts to keep her a D-list celebrity. However, there are still places where Kim Kardashian is not welcome! According to reports, an ultra orthodox Jewish site edited Kim Kardashian out of two photos taken in Jeruslem, Israel because she is a pornographic symbol. We all know that Kim, Kanye West, and North West traveled to Jerusalem, Israel and had North baptized in a church recently, right? Well, they all sat down with Jerusalem mayor Nir Barkat right after that, and pictures showed the entire group having dinner.

Alas, people were NOT happy that Kim Kardashian was photographed with the mayor, and on their home soil, no less. In fact, the website Kikar HaShabbat actually removed Kim from the photos when they posted them, using an enlarged receipt to cover up Kim in one of the photos. In the other photo, Kim is completely blurred, even though Kanye is still visible standing next to her.

And why exactly did Kikar HaShabbat decide to remove Kim from the photos? Well, the editor Nissim Ben Haim told the Associated Press that it was because Kim Kardashian was a ‘pornographic symbol’ that went against traditional ultra-Orthodox values. In other words, Kim Kardashian’s public image has become so sexualized that websites are actually refusing to post her face anywhere for fear of offending orthodox values.