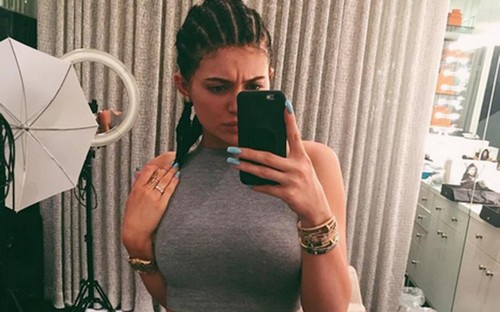 Justin Bieber rescued Kylie Jenner from the absurd attacks on her for wearing her hair in cornrows. Back in the 1990’s, when MTV still played music videos and boy bands made music without auto-tune, a feverish hairstyle gripped the world. Male and female celebrities from all walks of fame took to the fashionable salons of yesteryear to have their heads remade into a Children of The Corn diaspora. The ‘cornrows phenomenon’ was quite the fashion faux-pas, except no one cared, because, y’know, the 90’s.
And then this happened:

Kylie Jenner shared a photo of her cornrows via Instagram over the weekend, blowing up the universe and murdering political correctness in its sleep. Hunger Games actress Amandla Stenberg “saw [it] as Jenner’s willingness to participate in cultural appropriation but reluctance to bring attention to serious issues such as ‘police brutality or racism.’” Stupid much?

Long story short – Jenner, Stenberg and a heap of keyboard warriors became involved in a furious racial and cultural debate. It was the most vapid tête-à-tête in the history of the Internet. Thank the good Godiva for Justin Bieber; he defended Kylie’s little cornrows.

“Guys leave her alone, we’re all trying to figure it out and she happens to be under a microscope! I’m the first to know this. But saying she’s being racist because she wants her hair in braids is ridiculous. Let’s focus on the bigger picture and instead of fighting over something stupid let’s do something about equality, but it doesn’t start here blasting a 17 year old kid for wearing braids smh,” wrote Bieber.
Bullying? Racism? Instagram brutality? Who died and made Amanda Stenberg a pop culture critic?

Don’t fret though, because Kylie, little cornrowed Kylie, is planning to shave it off at the end of the week. All the above? All in vain.

What do you think? Is Kylie Jenner looking for attention? Was Amandla Stenberg out of line? Let us know your thoughts in the comments below.

Editor’s Note: If you wear a particular hairstyle are you supposed to become Al Sharpton? If you use medicine invented by a Jew are you supposed to support Israel? Cultural appropriation? This is America and we are the great melting pot where everyone is equal under the law and we get to enjoy and use the best of what all cultures have to offer without apology or political overtones.