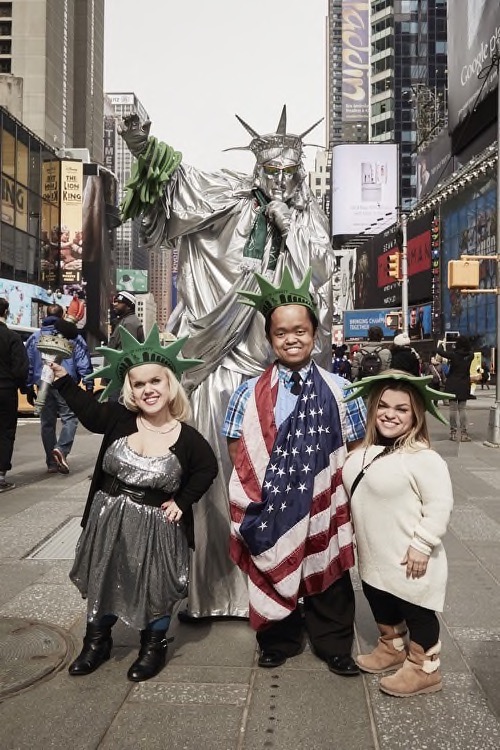 Tonight on Lifetime Little Women NY airs with an all new Wednesday, March 25, season 1 premiere called, “Big City, Little Women,” and we have your weekly recap below. On tonight’s episode, the lives of a group of girlfriends living in New York City who happen to be little people are chronicled.

This show is about a group of friends who navigate the Big Apple while facing obstacles that test people even of average height, including hailing cabs, catching subways, traversing the crowded streets and just about everything else that’s part of a New Yorker’s hectic life.

On tonight’s episode as per the Lifetime synopsis, “the lives of a group of girlfriends living in New York City who happen to be little people are chronicled. In the opener, Elena visits Lila and meets the rest of the crew, but when she brings up a taboo topic Kristin has a panic attack.”

Tonight’s episode is going to be a fun one, which you won’t want to miss. So be sure to tune in for our live coverage of Lifetime’s Little Women NY Season 1 Premiere — tonight at 10PM EST!

We’ve seen the little women take LA but what about New York. Subsequently, someone at Lifetime finally realized that the Big Apple deserves a little love too and that’s why on tonight’s premiere episode of “Little Women NY”, we get to meet a whole new set of fresh faces ready to introduce us to their world. But before we get to new, let’s talk about the old.

Remember Lila. If you don’t then here’s quick reminder. She’s a good friend of Christy’s on the LA Version and so recently she went out there for a visit. However the trip was ruined when her ex Joe then began derogatorily talking about her and well one thing led to another and it ended up causing a fight between him and Christy’s husband who was only trying to defend her.

So that’s Lila. And funnily enough Lila was later able to make amends with Elena, a good friend of Terra and her boyfriend Joe, after a different altercation caused another bust-up. And that’s what brought us to the present.

You see Elena is now the one visiting Lila in New York. And Lilia wants to make sure that before Elena leaves, she goes with a better impression of her. So she’s invited Elena out on the town to meet all her friends.

And unfortunately only one of these friends were warned to be on their best behavior. First there’s Jason who is a bit ambiguous about his sexuality but none of his friends want to pry so that’s just his business. Then there’s Jordanna who’s happy and in love with her boyfriend of nearly two years. Yet is worrying her boyfriend might take a job that would require him to move away for three months.

After Jordanna, there’s Dawn who can be a bit abrasive and her wild child sister-in-law Jazmin. Dawn it seems makes a big deal about staying away from little people stereotypes. I.e. the entertainment world. So she doesn’t believe Jazmin, a known performer, should stick with the trade because according to her Jazmin would simply get stuck playing an elf instead of actually get worthwhile opportunities. Though, for the most part, Jazmin appears to be fine sticking to her guns.

Besides those two, there’s Misty otherwise known as the girl from a small town country girl and there’s Kristin. Kristin is a hopeless romantic however a couple of years ago she had cheated on her husband and that’s what led to their divorce.

All this is what Lila told Elena. But never in her wildest dreams did she think Elena was to bring up some of the things she said.

Yet from the very beginning, in meeting Lila’s friends, Elena almost went out of her way to insult them. And when she wasn’t doing that – Lila was upsetting her friends by flirting with one of their boyfriends. So maybe Lila is a troublemaker.

Elena’s first mistake was asking Jason point blank about hi sexuality. It was rude of her and really none of her business especially as she’s married and can’t even use interest as an excuse. Then Elena told Dawn that she dresses like an old lady. And Dawn is the one that writes a fashion blog.

But when someone suggested that Elena and Dawn should work together, Elena said their styles were too different and then went into detail.

Thankfully the ladies were able to move on from that spat but not long after she started a fight with Dawn she then began a fight with Kristin. She asked Kristin if her boyfriend now is the same guy that she cheated on her husband with. And, well, that just made Kristin fall apart.

Apparently, Kristin is still raw about her divorce ended and for Elena to bring that up is now making her question her friendship with Lila. Because it had to be Lila that told Elena about the affair and for someone with her own dirty little secrets – Lila ticked off the wrong people by being a blabbermouth.