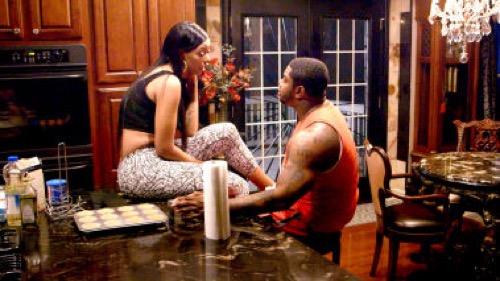 Tonight on VH1 their series Love & Hip Hop Atlanta continues with an all new Monday July 13, season 4 episode 12 called “Blast From the Past” and we have your weekly recap below. On tonight’s episode, Rasheeda and Erica confront Kirk.

On the last episode, Joseline and Stevie traveled to L.A. on business; Jessica Dime and Margueax showed off their skills at an open mic night; Mimi and Dawn fought over MF Management; and Rasheeda thought that Kirk was cheating on her. Did you watch last week’s episode?  We did and we recapped it right here for you.

On tonight’s episode as per the VH1 synopsis, “Rasheeda and Erica confront Kirk; Scrappy has a surprise for Bambi; Joc commits to Khadiyah; and Kalenna and Deb have a falling out.”

Rasheeda and Erica knock on Kirk’s hotel room door, hearing the sounds of a woman laughing from inside. They have come after calling to hear Ashley answer Kirk’s phone.

Ashley opens the door, and the two of them pass her, asking where Kirk is. Ashley screams about how Kirk is not there. Who is there, however, is Ashley’s girlfriend of two years, Jamie. Confused, Jamie asks what is going on and asks how Ashley is not acting professionally. Rasheeda says that Ashley is coming at her sideways like she is banging Kirk. Ashley tells Rasheeda that Kirk is staying in room 31 down the hall.

Ashley says in confessional that clearly Rasheeda is having some issues with Kirk and that she should be embarrassed as hell to burst into the hotel room looking for him.

Scrappy gives Bambi a key to his house as a sign of devotion after seeing that she continues to wear his promise ring. She tells him he needs to do something with his situation about Erica, because he is now giving her access to his child by giving him a key to the house. She tells him that for her to take the key, he has to go talk to Erica. He promises to do it.

Rasheeda goes down to room 31 after sending an amused Erica to the lobby to wait for her.

She explains to Kirk that she came to the hotel and asked for his room. Kirk is flattered by Rasheeda’s jealousy. He tells her that Ashley likes girls, and Rasheeda asks why he didn’t tell her that in the first place.

Mimi is working to get opportunities for Jessica Diamond. She meets up with Jazze Pha, trying to make up for her mistake of bringing both Jessica and Tiffany to his studio at the same time and see if he will listen to any of Jessica’s music. She explains that Jessica came from the dancing world and doesn’t know how to act. Jazze Pha says Jessica “has no couth.” He says that working with Jessica is out of the question for him, but he might want to work with Tiffany.

Now, Mimi has to go deal with Tiffany and apologize to her as well so that she can get her cooperation with Pha.

Yung Joc tries to go back to KD yet again in an attempt to get her back. He shows her the paperwork that proves he has finalized his divorce from Alex. He also says he will go to Sina and tell her that all he wants to do with her is co-parent.

Kelenna meets with Deb to see if she is really able to deliver as a manager. She tells Deb that Tony thinks she needs to explore her options and that Deb may not be the best manager for her. She asks what she is able to do for her and her career. Deb says she is feeling that Kalenna thinks working for her is a privilege. Kalenna says Deb should feel privileged to work with her because she is someone who gets checks from work in the past and that she makes money in her sleep.

Deb says she is acting like she is a bag of diamonds when she is really a bag of garbage. She says in confessional that she has heard about Kalenna having money problems so she doesn’t know why she is in her office bragging about money.

Deb says she isn’t the clean up woman and isn’t going to clean up anyone’s mess. Kalenna asks her what the last thing she has done is. Deb says that she is not going to have Kalenna disrespecting her in her house and that she could go there and talk about the real story but she isn’t going to.

Scrappy goes to Erica’s place to talk. He says the two of them can work together to come to an agreement about the child support. Erica is surprised by Scrappy’s show of maturity.

The two of them are going to work together to create a special ball-themed party for Emani.

Mimi meets up with Tiffany Foxx. She apologizes for the madness that occurred at the meeting with Jazze Pha, saying she didn’t anticipate things would be that bad. She says that is her fault, that she is inexperienced in the field and she will never make that mistake again. She says she smoothed things out with Jazze, and that he doesn’t want to work with Jessica but does want to work with her.

She says she really wants to work with Tiffany because she has something she likes, and Tiffany also says there is something about Mimi she likes. Tiffany says they should put the management thing aside for now, but still make money together.

Mimi realizes the high demand for Stevie and decides to talk to him.

Rasheeda supervises Ashley’s photo shoot at Kirk’s request, feeling slightly bad about confronting her in the hotel room only to find out she is gay. Rasheeda admits that she was wrong, saying her behavior wasn’t professional. Ashley apologizes for also saying some things that were wrong. She says that she will always forgive Rasheeda.  Rasheeda says they can work and have a better relationship now.

Ashley tells Rasheeda that five years ago her mom committed suicide, which caused her to be depressed. She says she has never been close to any female that she can relate to, and that she would like to look up to Rasheeda. Rasheeda says she isn’t against that at all.

Yung Joc goes to cut things off with Sina and stop leading her on.

Sina says in confessional that she is hoping he has finally made the decision to stop chasing KD around and come back to her.

Sina knocks the hat off of his head and tells him “f*** you” on behalf of all the women he’s messed with.

He says his heart told her to tell him the truth. She asks him if his heart told him that while they were in the bed together. He says she’s upset with him now, but will love him in the long run for telling the truth. Sina lunges at him, slapping him. He walks away so the children do not see them fighting.

Mimi takes Jessica to meet with Jermaine Dupri to get him to produce a song for her. When she comes in, he tells her that he has heard about her antics.

Jessica has brought her song, “Disrespectful”, which she plays and performs for him. He calls the song “stripper fight music,” calling it interesting. Mimi asks him if he has a track for Jessica, and he says he makes the beats as the artists come so he doesn’t have any songs already prepared.

He tells Jessica to work on performance because he doesn’t know if she could really perform it. After the meeting, Mimi gives Jessica a management contract to look over. Jessica thanks Mimi for believing in her.

At her husband’s bar, Kalenna tells Rasheeda about her fight with Deb. Tammy arrives, saying she is there to talk to Kalenna. She asks what happened between her and Deb, and Kalenna says she’s surprised she is asking that as that is her personal business. Tammy says that’s her mother and if someone disrespects her, she wants to know. Kalenna says she was asking the proper questions by asking what she can do for her career. She says it went left and Deb started coming for her life. She says she doesn’t think they should start talking about this at another business event. Tammy says she doesn’t care about her business.

Tammy asks Kalenna why she met with Deb if she didn’t know who she was and what she brought to the table. Kalenna says she was on tour, and Tammy asks her what tour. The two start getting closer to eachother, and guards separate them as they continue to yell in eachother’s faces.